“Vincent Paul Abbott aka Vinnie Paul has passed away. Paul is best known for his work as the drummer in the bands Pantera and Hellyeah. No further details are available at this time. The family requests you please respect their privacy during this time.”

This surprise announcement, which appeared on Panteras Facebook page this morning, has left the rock community reeling with shock and sadness. Vinnie Paul, drummer and co-founder of Pantera has passed away, age 54. No further medical details are available. Paul formed Pantera with his brother, ‘Dimebag’ Darrell Abbott in 1981 and went on to sell over seven million albums. They became hugely influential and were responsible for several of the heaviest albums ever to grace the mainstream charts.

After the 2003 split of Pantera, the Paul brothers went on to form Damageplan. Vinnie took an extended break from the music business following the tragic murder of Dimebag onstage in 2004. He then went on to join Hellyeah. Vinnie was vital to the sound of these bands, giving them a solid groove that was the envy of many – often duplicated but never bettered.

He was much loved in the rock community and the outpouring of condolences has been immediate and heartfelt. Perhaps the most fitting tribute is to leave a selection of them here:

“Terribly saddened by the news of Vinnie Paul’s passing. His impact on heavy music is immeasurable” – Alice Cooper

“Another metal hero taken too soon. Say hello to Darrell for me. Rest in peace my dear friend” – Dave Mustaine

“Tragic news about Vinnie Paul today. He was one of the warmest people I knew. A truly good and fun friend.” – Slash 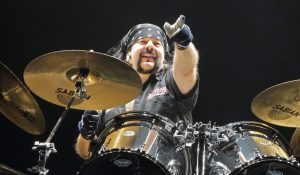