After several hours of internet confusion and hoping against hope, the news was confirmed: Tom Petty had been found unconscious and in full cardiac arrest in his Malibu home. He died later in the evening in hospital.

Petty was born in Gainsville, Florida in 1950. His early childhood was spent cowering at the hands of his alcoholic, abusive father but after meeting Elvis Presley on a film set in 1960 he was set on his blinkered trajectory. It was rock ‘n roll or bust. Music was his passion, his obsession. He formed and played in various bands, including Mudcrutch (which he resurrected in 2008) but it was with the Heartbreakers that everything fell into place.

And what a band! Easily one of the top five (possibly even top two) backing bands ever, full to the brim with top class, much sought-after talent – Mike Campbell, Benmont Tench, Thurston Moore – they were scorching, and paired with Pettys songwriting genius, onto a dead cert winner. A casual glance through their greatest hits is a sobering experience for any band hoping to create a lasting body of work – ‘American Girl’, ‘Breakdown’, ‘Refugee’, ‘Into The Great Wide Open’ – hell, if he’d only ever written ‘Free Fallin’ he’d be guaranteed a place in the Rock and Roll Hall of Fame (into which they were inducted in 2002). The band continued to play marathon, celebratory concerts until as recently as last week, when they wrapped up their 40th anniversary tour at the Hollywood Bowl.

And that’s not forgetting his equally brilliant solo albums of the late 80’s/early 90’s, which, let’s face it, were Heartbreakers albums in all but name and whose songs graced Heartbreakers concerts without any seams showing.

He was a largely unassuming star. Never seeking the limelight or gracing the gossip pages of the tabloids. He just got on with the job at hand, creating and performing timeless and classic rock music. He was beloved of his peers, Springsteen described him as a “long lost brother”. His membership of the Travelling Wilburys was testament to his popularity. Indeed, the last word should and will go to his fellow Wilbury, Bob Dylan: “It’s shocking, crushing news. I thought the world of Tom. He was a great performer, full of the light, a friend, and I’ll never forget him”.

Amen to that. RIP Tom Petty, rock and roller. 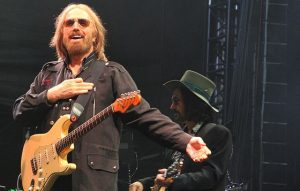