We woke to the sad news this morning that the classic Motorhead line up are reunited. Guitarist and last surviving founder member Edward Allen Clarke, or ‘Fast’ Eddie Clarke as we all knew him, died peacefully in hospital last night where he was being treated for pneumonia.

The news was announced this morning on the official Motorhead Facebook page. Clarke was introduced to Lemmy via Phil Taylor and one of Britain’s finest rock bands was born. Clarke played on all of Motorhead’s classic albums up to and including ‘Iron Fist’, at which point he left the band, unhappy with the direction it was taking.

He went on to form Fastway with UFO bassist, Pete Way and, in 2014, released a fine solo blues album. That same year he reunited onstage with Lemmy (at Birmingham’s own NIA) to tear through ‘Ace Of Spades’.

However good Motorhead remained, they never quite managed to recreate that manic, chaotic Lemmy/Clarke/Taylor roar – that unique combination of rock ‘n roll, NWOBHM, rock, punk, libido and cheap drugs – all played at an ear-bleedingly ludicrous volume with tongue planted firmly in cheek, that made them one of our most beloved bands.

Tributes have started to pour in. Phil Campbell said: “such a shock, he will be remembered for his iconic riffs and was a true rock and roller”, while Mikkey Dee added: “oh my fucking God, this is terrible news, the last of the three amigos”. 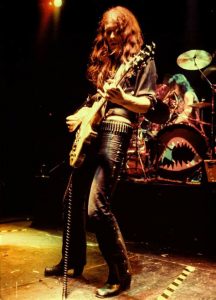