‘Bury My Innocence’ – the latest release from Italian sludge trio Nudist, is an interesting listen – if, indeed, listen is the operative word. This EP (the bands 4th release, and 2nd with vocals) is more of an immersive experience than a mere straightforward listen. You lose yourself in it, swirl in the audio morass. It’s not even a soundscape, more of a swamp, an aural La Brea tar pit of merciless, sludgy noise.

Opening track ‘Strengthless’ drops you in head first. It’s a warm, booming sound and the riffs, when they arrive, are ill-formed, dishevelled and thunderous. The woolly, mammoth riffage lumbers and crashes through the rhythm foliage. Song structure isn’t the most discernible feature on display here. It briefly drops into gentle strumming and then sets off with renewed vigour into an infinitesimally livelier crunch, although there’s not much intention of going anywhere in a hurry.

The title track is something of a change of pace – it’s urgent Doom (if such a thing exists), although the scruffy scuzzery doesn’t abate, it’s still all subsumed into the primordial soup.

This all has an indistinct sense of menace, of unspoken violence. Some of the riffs are awkward, angular, with a slight Post Rock feel. But any brief lived spikiness always melts away. The riffs keep coming, tumbling slowly over each other like the undead shuffling instinctively towards fresh meat. The bass throughout is a huge, distorted, filthy constant.

‘Dead Leaves’ is relentless, a runaway locomotive of a thing that ponders what sludge would sound like if it were played by Motorhead. It degenerates into a full-on speed metal distorto-fest. Riffs and time changes morph and abound – who knows, they may well be playing an entire Doom rock opera within these scant five minutes.

‘Drift’ finishes the EP with spooky atmospherics and Post Rock style ambiance. I could be vastly mistaken but it sounded like mashed potatoes were being growled about at one point. So, all in all, a good, loud, heavy, enjoyable offering but one that lacks that certain evolutionary edge that would pull it out of its aforementioned swamp and move it ahead of its peers. It’s seemingly content to lumber around directionlessly like a wounded immenseasaurous – which, when it comes to sludge, is not necessarily a negative thing. 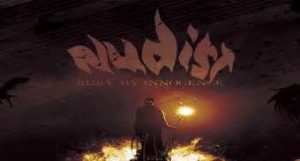