Since forming just over a decade ago Carnifex have been a persistent and persuasive purveyor of a particularly darkened form of traditional death metal. With an approach that is as measured as it is menacing, the San Diego quintet have adopted a style of their own, one that carries more than a hint of threat about it, exemplified by the single ‘Drown Me In Blood’ from this latest album, aptly titled Slow Death.

With a simple but effective sleeve of a blood spouting skull on a stark black background,Carnifex place their cards on the table before you even open up their sixth album for closer inspection. Previous full length Die Without Hope (2014) was in many ways a breakthrough release for Carnifex and Slow Death maintains the same acute levels of aural animosity.

The album’s title track maintains a compelling rhythm from start to finish, Carnifex as ever stomping to a mid-tempo beat, scissored guitar action cutting through the debris, on ‘Black Candles Burning’. While this is an extreme metal album, Carnifex occasionally drift to less visceral attacks and on ‘Six Feet Closer To Hell’ Scott Lewis even invites Lamb of God parallels as he spews out the title, aka Randy Blythe at his most vehement.

But when they turn into themselves such as on ‘Necrotoxic’ you have to stand well back as the death/grind levels become more immersive. Occasionally a death metal outfit like to keep us on our toes with a brief instrumental. On ‘Life Fades To A Funeral’ Carnifex take things to unprecedented levels with a delicately woven mini symphony that comes as a total surprise after the previous bone crushing selection of new material.

The traditional order is of course restored for the bellowing two final tracks, ‘Countess Of The Crescent Moon’ featuring some headspinning guitar work. The album closer ‘Servants To The Horde’ is about the relationship between band and fans, breaking down any barriers that may stand between them. It’s arguable though as to whether any barriers would withstand the full destructive force of Carnifex at their most pummeling. 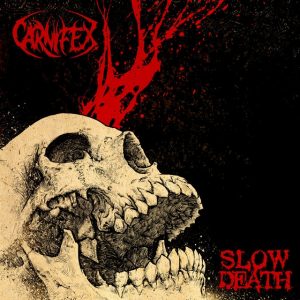 Montreal’s Despised Icon have on the surface dragged their heels with Beast, their first album in seven years. I won’t be telling them that though. Their devastating deathcore delivery doesn’t just crush your ribs, it then whips them out from your gut and pummels you around the head with them.

‘The Aftermath’ goes off like a firework right from the off leaving you to seek refuge from its phosphorus encased kick to the nutsack. ‘Inner Demons’ is every bit as visceral, an unbridled hardcore outburst laced with elements of grind and then presented to you on a barbed wire bed of blastbeats.

Despised Icon had been in danger of dropping off the radar since their impressive 2009 offering Day of Mourning and were in danger of being eclipsed by the likes of US hardcore kings Biohazard and Agnostic Front – not to mention our own dual vocal favourites Raging Speedhorn.

Beast plays out at breakneck speed but when the sinewed squeals emerge, like a piglet trying to flee its pen, on the savage ‘Bad Vibes’ you almost have to stop yourself from falling to your knees and offering a prayer of thanks for the Canadian crushers’ return. The Pinky and Perky routine returns on the titanic ‘Time Bomb’ which features a blastbeat of such magnitude you can’t even see over the top of it.

The pace never relents and the brutality levels never drop with Despised Icon seemingly determined to make people sit up and notice after a seven-year gap. The whole of Beast is spent in little over half an hour, the three-minute sonic stabs leaving you like a wounded animal having been given a particularly savage beating by an unforgivably cruel and senseless owner.

Penultimate song ‘Doomed’ is a 90-second diversion, as an increasingly stifling riff is played out against a backdrop of spoken words. Beast winds up with the titanic title track, during which a machinegun flurry of blastbeats are followed by bestial squeals as Despised Icon leave their imprint firmly embedded in your skull. 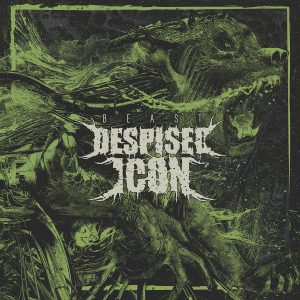