The world of fashion received some exciting news last year when word emerged about ‘a new black’ that designers had created. Said to be so dark the human eye could barely even pick it out.

It’s fair to say that this newly discovered black abyss would be just the kind of place where Nordjevel would hang out.

The Norwegians have only been together a year or so although the three members each have strong ties with Scandinavia’s dark and illustrious past via esteemed names such as Darkthrone.

Nordjevel was brought together by singer Doedsadmiral who found that his own thoughts around Black Metal, the Occult and the origins of Norway synced sympathetically with those of Nord (bass/guitar) and Fredrik Widigs (drums).

Widigs is actually a Swede but his black metal credentials are wel established as the drummer with the mighty Marduk. Doedsadmiral, Nord and Widigs have wasted little time in writing and releasing their self-titled debut album.

The teutonic plate shifting noise they’ve created in the studio is evidently duplicated on stage with a recent competition success securing the newcomers the opening berth at the recent Inferno Festival in Bergen.

The title of the album’s opening song, ‘The Shadows Of Morbid Hunger’ neatly reflects this icy Norsk blast, one so frozen with hostility you almost need woolly gloves on just to sit through it. 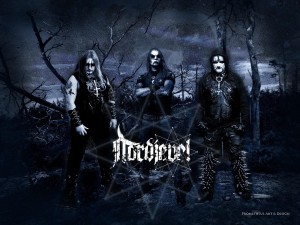 After a wintry wind whistles through your speakers, Widigs’ insanely ferocious blastbeats follow leaving you wondering whether his beleaguered drumkit will be able to withstand such ferocity across the entire length of the album.

On ‘Sing For Devastation’ things are just as intense although the cold shards are tempered slightly to allow more melodies to seep through, although even they are permeated with venom.

There are some great waves of Norwegian black metal spirit racing through this release, such as on the face-ripping ‘The Funeral Smell’ which sucks you in and then spits you back out with a vengeance.

‘Blood Horns’ has a thunderous opening before descending down the flaming path of chaos with Doedsadmiral snarling through his book of bile.

Fans of 1349 may like to note the presence of Archaon on guitar on the impressive closer ‘Norges Sorte Himmel’ which has a great theatrical beginning before dissolving into another compelling track.

Vinyl and digi versions contain an additional cover of Slayer’s timeless ‘Reigning Blood’ although Nordjevel have conjured up more than enough evil of their own here not to need help from anyone else. 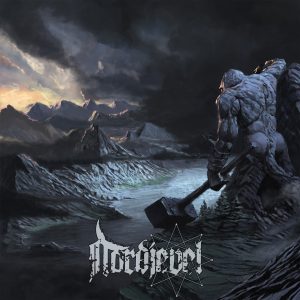