The heavy traffic on the road back from the eighties is getting even heavier. Sometimes it’s some grizzly, seen-better-days juggernaut, looking to rediscover past glories, and sometimes it’s a new artist/ band, hauling the music that was emblematic of an era, hoping to find an audience that is neither jaded nor apathetic.

One of the latter’s genuine talents is Erik Martensson, a Swedish guitarist/songwriter/producer, who’s got pretty close to re-inventing the melodic rock genre with his bands Eclipse and WET (if only he’d stop throwing in the kitchen sink).  And here, in an inspired pairing, he works with vocalist, Ronnie Atkins of Denmark’s semi-legendary rock band; The Pretty Maids. A Nordic Union.

Where the less talented of today’s AOR bands rely heavily on humourless parody and empty pastiche, Martensson’s writing is consistently fresh. He’s not reinventing the wheel, he’s stamping out a new version of an old template, precision engineered, oiled up and recalibrated to suit today’s discerning ears.

Occasionally, you’ll still recall the high quality sound of legendary predecessors…Magnum’s epic grandeur (‘The War Has Begun’, ‘Falling’) Desmond Child’s escalating operatics (‘Hypocrisy’, ‘The Other Side’).  These and others will float in and out of your auditory vision from time to time, but they are only signposts on Martensson’s and Atkins’ journey.  The real meat is to be found on tracks like ‘Wide Awake’, a powerfully integrated piece of melodic and symphonic rock, and on the evocative ‘When Death Is Calling’.  Here, Martensson uses his guitar to launch a chiming, repeating motif, alternating melancholy passages with wiry riffs and a shouty, sweaty chorus.  It’s the album’s centre point, paving the way for the driving, pounding ‘Point Of No Return’ and ‘Go’, a lesson in melodic rock song-craft that should be mandatory listening for every band and every aspiring songwriter who name their favourite artists as Journey, Foreigner or indeed, Pretty Maids.

It’s interesting to compare this album with another being released on the same label this month – Find Me’s Dark Angel, which is essentially a joint effort between producer, Daniel Flores and vocalist, Robbie LaBlanc.  On Dark Angel, the tracks run into each other like they don’t notice the lights have changed.  A suffocating blandness creeps over the music as Flores and LaBlance seek to emulate past greats, and end up completely losing any sense of identity.  Where Nordic Union wins is not only in the quality and variety in the compositions, and in Martensson’s imaginative production flourishes and attention to fine textural detail, but mostly in the fact that Atkins’ voice – a careworn baritone that stakes out its own hard won territory – is the gritty, imperfect foil for Martensson’s contoured melodies and filigreed hooks.

Few albums this year will be this good. 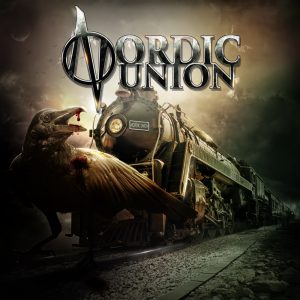