Saturday 26th August 2023 will see Noel Gallagher’s High Flying Birds return to Manchester for a special homecoming show, marking their first full headline performance in the city since 2019. For the first time ever, Wythenshawe Park will host a major outdoor summer concert, headlined by Noel Gallagher (who grew up nearby in Longsight, Manchester). Noel Gallagher’s High Flying Birds also headline a major outdoor concert in the beautiful grounds of English Heritage’s Audley End House & Gardens, one of England’s grandest mansions, on Saturday 5th August. Special supports are lined up for each show.

The announcement follows the incredibly well-received release of Noel Gallagher’s High Flying Birds’ brand-new single, ‘Pretty Boy’. Currently receiving widespread national radio support, added to the A-list across all key networks (including BBC Radio 2’s Record Of The Week), the track signals the beginning of a new creative chapter and first new music from Noel’s forthcoming new studio album which will be released next year – further details to be announced soon. Recorded at Noel’s own studio in London, Lone Star Sound, and co-produced with Paul ‘Strangeboy’ Stacey, the track also features long-time friend and collaborator Johnny Marr on guitar.

Noel Gallagher’s High Flying Birds first emerged in 2011. They’ve since released three studio albums, a collection of EPs and have played hundreds of live shows to fans across the world. June 2021 welcomed the release of ‘Back The Way We Came: Vol 1 (2011-2021)’ – a career-defining best of, celebrating a decade of Noel Gallagher’s High Flying Birds’ richly diverse body of work. The album marked the band’s 4th consecutive No.1 album and the 12th No.1 album across Noel’s prolific career.

Summer 2022 saw Noel Gallagher’s High Flying Birds complete a nationwide tour of outdoor shows, culminating in an epic set on Glastonbury’s Pyramid Stage to one of the weekend’s biggest crowds. 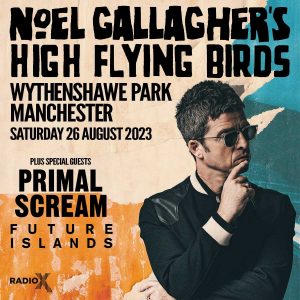 Acclaimed Liverpool indie rock band The Zutons will be joining them as special guests at Audley End House. Tom Meighan (former Kasabian lead) will also make an appearance, performing some of his most recent solo work.

The Zutons were introduced to the British music scene back in 2001, and have earned their critically acclaimed indie rocker status through the release of three UK chart-climbing albums including ‘Who Killed…… The Zutons’ and ‘Tired of Hanging Around’ (featuring hits such as ‘Valerie’). Their one-of-a-kind style and energetic live shows have attracted fans across the globe, including a range of industry icons (including Noel Gallagher, Miles Kane, Nile Rodgers) that have commissioned various band members to feature on their own albums along the way.

Tom Meighan is a man who is no stranger to the UK spotlight. The former vocalist of the alternative rock powerhouse Kasabian, Meighan’s signature frenetic energy and powerful baritone have kept his name in the mouths of British music fans since he arrived on the scene in 1997. Since battling with alcohol addiction, mental health issues and a very public familial conflict, Meighan has pursued his own solo musical endeavours with a focus on rehabilitation and emotional honesty. From his debut ‘Movin’ On’ EP (featuring singles such as ‘Would You Mind’ and the namesake release ‘Movin’ On’), to his ‘Let It Ride’ and ‘Shout It Out’ singles, 2022 is the start of something new for Tom Meighan, but more importantly it is the start of a new (and healthier) man.

The concert is part of Heritage Live, a unique annual concert series that brings world-famous artists to the most beautiful landmarks in the country. Past concerts have taken place at historic sites such as Kenwood House, Hampstead Heath, Englefield House, Berkshire and the Ardingly Showground.

Tickets for the Audley End House will be available for pre-sale from Wednesday 7th December at 9:00am and on general sale from 9:00am Friday 9th December: