For those metalheads who are particularly partial to all things fast and heavy, there is only one place to be on this gloomy, September evening. Tonight, at The Dome in north London, headbangers are in for a four-band death metal extravaganza.

We pile into the venue’s sweltering innards; a blistering furnace of black t-shirts, tattooed limbs and orange amps. Omophagia take the dinnertime slot. The Swiss band – whose name translates to something resembling ‘eating of raw flesh’ – have just released their third studio album 646965. Their melodic-death set, with clever fret runs and slower catchy riff sequences, sets The Dome alight before it’s even hit 7pm.

They are swiftly followed by Oregon’s Vitriol; breakneck speed, ruthless aggression and a delicious slice of technicality. Their debut album, To Bathe from the Throat of Cowardice, is so intense that you are left feeling brutalised (willingly so).

Florida Death Metal legends Hate Eternal break onto the stage in a frantic display of vexation and hostility. This is old school metal, continually playing the much-welcomed game of ‘How many times can you pick a string in a second?’. The crowd is manic, the pits stretching from one side of the room to the other. They end with ‘The Stygian Deep,’ taken from their 2015 album Infernus; this offers an exciting singalong to many in the room tonight. Although this music isn’t necessarily technically progressive, it’s solid and delivers the brutal assault that we were all hoping for.

Headlining tonight are South Carolina crushers Nile, bringing their legendary blend of Egyptian prowess and mystical themes to the beer-stained walls of The Dome. They are strongly plugging their new album this evening; Vile Nilotic Rites is released on November 1, as a post-Halloween scarefest.

Brian Kingsland tells us how happy they are to be back at The Dome, and for a sold-out show. He’s chatty and full of jokes this evening, alongside founding father Karl Sanders who stands at his side. We even take part in a mass death-metal growl, to which drummer George Kollias is outed and ridiculed for not taking part.

Nile’s music continues to evolve with the band’s renowned technical prowess and their willingness to experiment. The chimes on their new single ‘Long Shadows of Dread’ add an extra level of impending doom early on in the set whilst the classic ‘User-Maat-Re’ has an opening riff that could belong to an old Western movie (but with less cowboy boots).

The glimpses that we get into the new album, including the title track ‘Vile Nilotic Rites’ are exciting and received with vigorous nodding and impassioned chatters. It would have been nice to hear a bit more from it… what a tease they are. But by god, they’ve done it again. And it’s better than ever. They close this evening with the title track of their 2000 opus Black Seeds of Vengeance; tombs, papyri and a healthy dose of godly injustice – it is Nile, after all. 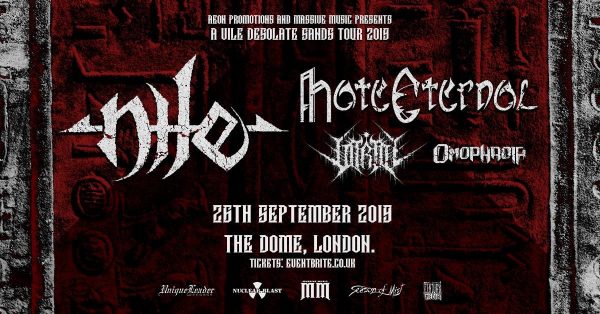