Every album is a significant moment in a band’s career, but to paraphrase a well-known cliché, some albums are more significant than others. This is Nightwish’s first album since Annette Olzon left the band in the middle of the ‘Imaginaerum’ tour, and thus the band’s first release with Floor Jansen as vocalist. It’s also the band’s first album with multi-instrumentalist Troy Donockley listed as a permanent member. Although the two albums Annette recorded with the band were by no means bad albums, the consensus seems to be that her time in Nightwish was not an overwhelming success, and anyone who was familiar with Floor Jansen’s work with After Forever and ReVamp, and then saw the galvanising effect she had on Nightwish as a live entity, will have been looking forward to hearing the impact she might have on the band.

Even then, just as the band looked to have settled the line-up, longtime drummer Jukka Navalainen announced that he was taking a break from the band due to health problems as a result of chronic insomnia, so drumming duties for the album were taken care of by Wintersun’s Kai Hahto, potentially another hurdle for the band to overcome while the album was being recorded.

So, a new Nightwish album, with a new singer who seems like a perfect fit for the band, and as the first track, ‘Shudder Before The Beautiful’ begins, it was all I could not to clench a fist and shout ‘Yes!!’, because it’s almost classic Nightwish. The string parts circle around an enjoyably crunchy riff from Emppu Vuorinen, Floor sounding like she’s been in the band forever; it’s a great track. The only reservation I have is that Floor’s vocals seemed comparatively restrained, but then that came to be a recurring problem on this record.

Nevertheless, Endless Forms Most Beautiful is a very enjoyable record throughout. I wasn’t sure about second track ‘Weak Fantasy’ on first listen, thinking the vocal parts were a little repetitive, but it’s definitely a grower along the same lines as the opener, and it’s followed by the first single, ‘Elan’, where Troy Donockley makes his presence felt at last, before ‘Yours Is An Empty Hope’, which is a belter of a track. Emppu’s riff has real bite on this one, and Marco Heitala sings with genuine passion. ‘Our Decades In The Sun’ is a slower, more atmospheric track, which tries to move away from the traditional ‘verse-chorus-verse-chorus structure’. A good song, but toward the end it becomes one of those songs that feels it’s about to escape from its restraints and burst into action, but manages to keep itself in check to the end. Another song that really grows on you.

That’s followed by ‘My Walden’, a lively song with a Celtic influence that will probably be a corker live, and then the title track itself. This is an absolute cracker, possibly the best track on the album, with a tremendous riff, but yet again, there’s a sense of restraint, just when you think the band are about to floor (sorry!) the throttle and hit full power, it’s never quite the full-on Nightwish track you’re hoping for. ‘Edema Ruh’ is another good song, again, with a Celtic influence, and with a fine, if brief, solo from Emppu Vuorinen, the ‘Edema Ruh’, by the way, being a troupe of travelling performers in the Kingkiller Chronicles novels by Patrick Rothfuss. This is followed by ‘Alpenglow’, which is a straightforward Nightwish song, with a chorus that will also probably go down well on stage, and then there’s ‘The Eyes Of Sharbat Gula’, an instrumental, albeit with wordless vocals which sound quite reminiscent of Anathema, and a choir. Again it’s a very atmospheric piece, which would sound right at home on the ‘Lord of The Rings’ soundtrack. And again to save you looking it up, Sharbat Gula was an Afghan woman who featured on the cover of ‘National Geographic’ magazine, whose striking looks became a symbol of the struggle in that country

Finally, there’s the climax and centrepiece of the album, ‘The Greatest Show On Earth’ a 24 minute monster of a track, that, as composer and keyboard player Tuomas Holopainen told ‘Powerplay’ magazine, is “A wonderful idea about the beginning of existence on earth, all the way through to some time in the future”. Reading that, I was a little worried it might be the same kind of sprawling mess that was Yes’ infamous Tales From Topographic Oceans, which had the same kind of concept, but this is a much tauter piece, with some fine work by the band linked by orchestral passages, and also featuring the voice of the controversial evolutionary biologist Richard Dawkins, whose spoken passages highlight the themes of the track. It takes some getting into, there’s a lot of music to take in, but I loved that Floor at last showed some of what she can do vocally, particularly the interchange with Marco in Part Three, ‘The Toolmaker’, which genuinely shows the chemistry of this lineup.

At first listen, I didn’t really get Endless Forms Most Beautiful. My initial thoughts were that it was a little too restrained, an album that needed to loosen itself up and really go over the top a few times, but on subsequent listens it’s really begun to grow on me. I still have reservations, I don’t think the band have made full use of the abilities of their new singer and I’m not completely convinced that the band have got the balance between the orchestral parts and the rock band exactly right, but this is a good album and above all, a good Nightwish album. I don’t think it’s quite a great Nightwish album, a Once or a Century Child, but such is the potential of this line-up, that great album should just be a matter of time. 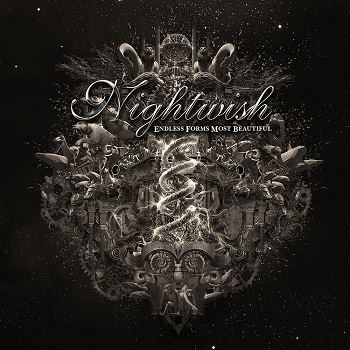