Ok, this may be a few days late but it’s time to party like it’s Halloween. Nashville one-man synthwave band Nathan Yarroll (otherwise known as Night Machine), armed with only a handful of synths and beat pads, gives us ‘Themes Of The Dead’ – an almost concept album of retro tunes inspired by horror movies and 80’s video games.

‘Tis a very clever concept. The song titles cunningly implant imagery in your mind which you then project onto the tunes…or do they, is it the tunes themselves that conjure up the blood soaked images? Or was it all in your twisted mind already? Who knows, but whichever way round it works, it certainly…urm, works.

The 45 second intro is full of spooky monks, chanting (as they are wont to do), from which we head into ‘Old Dust (The Crypt)’, with it’s underlying synth drone and ticking Carpenter throb, its arterial pulse gradually fades out before we hit the more insistent bass-led beat of ‘Black Magic (The Witch)’, which, although suitably eerie, may remind British viewers of the classic ‘Garth Merenghi’s Darkplace’ (not seen it? I urge you to do so).

We then hit the mean streets of ‘Menace (The Stalker)’. It has a sleeker digital beat, summoning to mind an urban pulse, full of steam, neon and bustle. It suddenly amps up – the chase is on – almost rocking out to it’s grisly conclusion.

We get possible odes to Jason Voorhees, full of crazed, unhinged intensity, hip, sexy vampire themes (a la The Hunger), sci-fi invasions full of groovy (neon lit) plinky synths and robotic drones. There’s also a definite Space Invaders/Galaxian vibe to the distorted FX beats of the gritty, relentless ‘Hookhand (The Hitcher)’, and let’s not forget the brilliant ‘Chapel District (The Ripper)’ – A fog drifts menacingly down the (neon lit?) cobbled streets of Olde Laahndan Taaahn, into an dark alley, covering a multitude of sins. Cor blimey guv, it’s right sinister…in an historically inaccurate, cheesy, straight to VHS kind of way…which, in this context, is good.

We finish with a face off with old Lucifer himself, your smile fades as his domain slowly unfolds before your disbelieving eyes…all set to a groovy disco rave, it’s powerful electro beat, with it’s nods to Bernard Herrmann’s ‘Psycho’ strings, has more bite and oomf than Carpenter, while still managing to be convincingly don’t-look-behind-you, old school scary.

This is the perfect soundtrack for these darkening evenings, when the cold bites and the shadows bleed into the night. Just wrap up warm, don’t believe any of those stories about that old abandoned house at the end of the street, stay in the light and hurry on home, you’ll be safe there…you did lock up didn’t you?

No-one could possibly get in.

Review by Gary ‘he was always such a quiet neighbour’ Cordwell 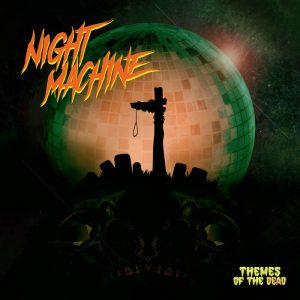