No question that New England were way ahead of their time. Despite their lack of commercial success, their slim volume of work … 3 albums, New England (1978), Explorer Suite (1980) and Walking Wild (1981), staked out a sizeable chunk of popular music territory that unfortunately did not ultimately translate into sales.

New England formed in Boston in the early seventies. The band, John Fannon, Gary Shea, Hirsh Gardner and Jimmy Waldo, released their self titled debut in 1978. It plays like a series of pen portraits of the music that influenced them most. The Beatles and ELO loom large … that’s been well documented. What hasn’t is keyboard player Jimmy Waldo’s significant role in defining the NE sound. His sweeping keyboard textures, almost otherworldly at times, is redolent of UK Prog pathfinders, King Crimson and Genesis. It gave the band’s music a unique dynamic, nurtured by Paul (Kiss) Stanley, their mentor, which was underlined by the clarity of his studio production.

Through their short lifespan, the band captured and preserved all their recorded material assiduously, thus this … New England Archives Box: Vol 1.

All 5 discs reveal so much. For fans, the first 3 are an enthralling magic carpet ride through the tracks written and worked on for the debut, in various US Studios, with the third disc containing the oven ready rough mixes. A fascinating evolution of ‘Hello Hello, Hello’, ‘Don’t Ever Wanna Lose Ya’, ‘Alone Tonight’ and ‘Nothing To Fear’, takes place through these 3 discs, as four great poprock songs develop from raw and vaguely derivative material into something memorably original. Eventually blossoming into the career defining final versions.

Disc 4 is something of an historical recording, containing the rough mixes for second album Explorer Suite, plus 7 tracks from John Fannon’s pre NE band, Target. Even in these rough mixes you can hear their voice. They sound more confident now. Legendary producer Mike Stone seems to be pushing them hard into a “more is more” mindset. Fans loved the finished article, but the album gained no commercial traction.

The real treasure is on Disc 5, which contains the rough mixes for the planned, but never finished fourth album. Failure at the box office does that to you. There’s clearly a more mature approach to songwriting and arranging here. They’d learned from Todd Rundgren’s not entirely successful stint at the production helm on WALKING WILD, the band’s third release. The music veers from Progressive Rock to Top Forty New Wave. It was a talented band moving forward with ambition and style.

This lavish boxset/clamshell is rounded off with previously unseen photos of the band which matches nicely with this previously unheard material. 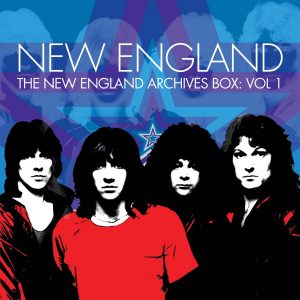