A blast from the past from Neurot Recordings with a reissue of a Neurosis classic, reviewed by Paul Castles, and released on 25 August 2017

Neurosis are regularly hailed as one of the most influential bands of their, or better make that any, generation. Their name crops up frequently when you read band interviews, in particular among those artists whose musical soul is not so much died black as charcoal. The second influential full length Neurosis release, The Word As Law, has been reissued on their own Neurot label, offering older fans the chance to indulge in a refresher course while simultaneously enabling the curious and the young to feel their devastating power for the very first time.

The Word As Law has remained out-of-print since the 1990s. When this album first saw daylight as a vinyl release in 1990 it did so via Lookout! Records, a label that Neurosis shared with a number of fellow Bay Area punk and hardcore visionaries…. and Green Day. The Word As Law is no pop punk partypiece though. As with their debut album, Pain Of Mind, The Word As Law is a blisteringly brutal barrage of songs that shared much in common with the likes of UK anarcho agitators Crass, Conflict and the Subhumans as well as US hardcore kings Black Flag.

But while the sheer anger within raged to the point where the beads of snarling spittle almost filtered their own way through your speakers, Neurosis also developed a deeper edge to their sound, plunging emotional depths with dissonant strands that opened the window on an even more subversive sound. The Word As Law is not a quick shot of adrenaline, although it’s certainly not lacking in that department. It crawls over you from different angles, burrows under your skin and eventually envelopes your whole being, grabbing you by the throat from the opening razored riff of ‘Double Edged Sword’. 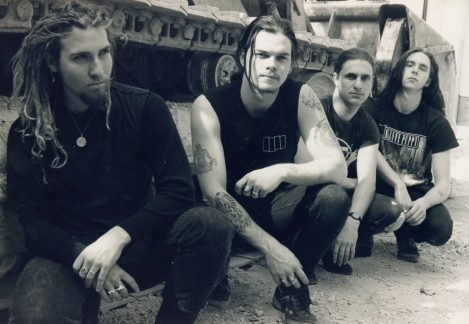 Neurosis songs move in a way that’s not always obvious. They have a rhythmic routeplanner all of their own and it’s only through some persistent playing that you start to feel confident in negotiating your way out of the maze of time changes and deftly placed hooks. That’s certainly the case on ‘The Choice’ which at times has more flavours than your average ice cream man but the real serious clout lands with ‘Obsequious Obsolescence’ which feeds off a gargantuan groove that gathers in momentum and power the further in you go, Scott Kelly barking out across the top of the peaks.

‘To What End?’ is every bit as gripping, opening with screeched anarcho anger over an even paced platform that oscillates teasingly before the destruction returns with slapped drums, brutal choppy axe work and yet within the mayhem lies some sinewed shards of light that just demand to be heard.

The Word As Law was recorded by Mark Lemaire at Sound & Vision in San Francisco of December 1989 with Kelly on guitar and vocals, Dave Edwardson the bass, skins under the turbo like thrust of Jason Roeder. This was also the first Neurosis recording to feature guitarist Steve Von Till. This album placed Neurosis firmly on the outside of conventional metal and hardcore.

What was to follow veered into even more avant garde areas which helped really build and establish Neurosis as leaders of the more abstract and agitated form of extreme metal, encroaching into doom perspectives too at times. There’s elements of that here on the bludgeoning ‘Tomorrow’s Reality’.

This isn’t the first time The Word As Law has been reissued, others feature various bonus tracks and singles. But here we just get the original eight venomous arrangements, all remastered by Bob Weston at Chicago Mastering.

The current line-up of Neurosis are still breaking balls, recently touring the US alongside Converge and labelmates Amenra.