Despite their British origins Nektar found their market in Germany where they made their home in the 70’s and later in their second adopted base of the USA. Unfortunately, their successes came from the markets of those countries which they made their homes and although their influence was widespread they remained very much a guilty pleasure in the UK. Many years on and despite the death of figure head guitarist and vocalist Roye Albrighton in 2016 three of the founder members Derek “Mo” Moore (bass/vocals), Ron Howden (drums/vocals) and Mick Brockett (lyrics/visuals) have come together with Ryche Chanda (guitar/vocals) who joined Nektar in 1978 along with Randy Dembo (bass/guitar) from the 2004 line-up and new boy Kendall Scott (keyboards) to work on tracks discovered by Howden on various tapes found in storage since the 70’s and which he felt “needed a rebirth”.

That rebirth comes in the shape of The Other Side the bands 14th studio album and the follow up to Time Machine from 2013 (2018’s Megalomania released under the New Nektar featured a completely different line-up including Roye’s son Che Albrighton). A true coming together of past and present it finds the band in good health over 50 years after they first met in Hamburg. It is obvious from the outset on the appropriately titled ‘I’m On Fire’ (which they are) that Nektar mean business. From the Deep Purple Hammond tones that introduce the track to Moore’s impressive vocals guiding us through the progressive rock archive, but which mask its vintage roots with lyrics harking back to a poem written for Moore’s then future wife in 1978. ‘Sky Writer’ dates back to the same period and evolved from an unused track called ‘Sky Pilot’. Finding the band in a calmer but very catchy BJH/Moody Blues mood with its simpler structure and ‘Whiter Shades Of Pale’ style organ passages. The 18-minute centre piece ‘Love Is/The Other Side’ brings together various ideas from the session and remembers those who have passed through the band over the years but are no longer amongst us and shows the new format truly gelling mirroring the cut ‘n’ paste nature displayed within the track itself. A real case of the new channelling the old as Ryche’s guitar twang takes on the spirit of Albrighton to great effect.

Deeper, darker more dramatic moods take hold for ‘Drifting’, its bass driven intro leading strongly before the song morphs within its one take nature and the band summon their inner Floyd. Although it was played live way back in 1974 ‘Devil’s Door’ now finally gets its studio debut. Seamlessly splicing an earlier live guitar intro by Roye Albrighton onto the newly recorded take of ‘Devil’s Door’ is a wonderful way of doffing the cap to the absences of such an important piece in the band’s historic jigsaw puzzle. ‘Devil’s Door’ rocks along on an Atomic Rooster vibe switching between lead guitar and epic keyboard throughout. At just under three minutes ‘The Light Beyond’ gives the listener an orchestral break showcasing Scott’s impressive keyboard talent. Chanda’s acoustic guitar switches with Scott’s piano/keys during ‘Look Through Me’ and although topped off by some impressive keyboards it involves little input from the rest of the outfit. This duo of low-key tracks acts as a great foil in contrast to the closing track ‘Y Can’t I B More Like U 2020’ which although opening on a similar acoustic tone quickly builds into a highlight of the album pushing each member front and centre and benefiting greatly from its improvisational manner. This latest edition of the CD closes out with a shorter cut of the albums catchiest track ‘Sky Writer’ removing it’s tapped out intro and clipped to a more radio friendly 5:25. Who needs radio friendly?

Only originally release in January 2020 following a Kickstarter campaign this new offering of The Other Side contains the Deluxe CD with the aforementioned bonus track ‘Sky Writer (Radio Edit)’ along with a DVD, ‘The Making Of The Other Side’ featuring insightful interviews with the current members as well as the friends and followers who have made this historic project possible (The Nektarines) along it also includes live in the studio sessions and excerpts from the band’s first live show at ProgStock in New Jersey. Whether you are new to Nektar or rediscovering them The Other Side hits the spot.

The Making Of The Other Side 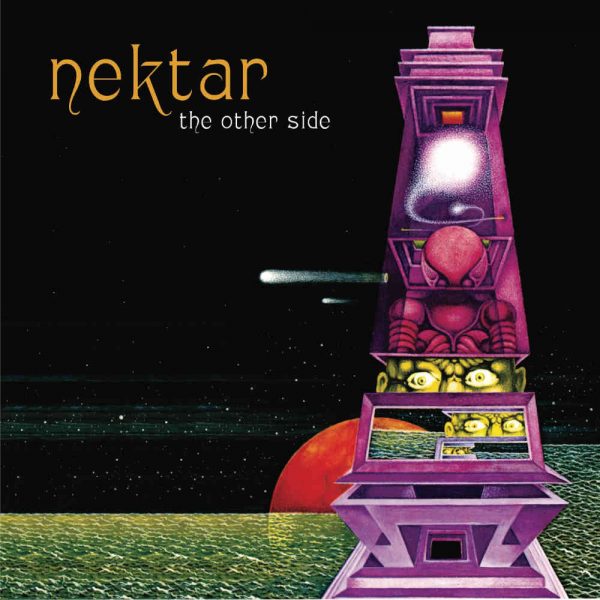