Sharper than a broken bottle in a Friday night scrap…

When this enterprising French trio released their debut full length album Putrid Death Sorcery two years ago, it was clear that the doors behind which lay the diseased, decrepit and damned were about to open to receive another welcome addition to their revolting ranks. With the likes of Gorelust, Foetal Juice and Putrid Offal serving up their own vomit menu at the top table of sickeningly serious death metal, across the Channel, Necrowretch were doing much the same. These Gallic gore fiends stride the divide that borders black and death metal but the overall result is one of x-rated menacing mayhem.

As frontman Vlad declared on the release of With Serpents Scourge, “I’ve worked 18 months to write this album, it was a lot more difficult than the previous one since I wanted to push all the limits further, break all boundaries and deliver something as bestial as hell.” Drawing inspiration and savage strength from such demigod demons as Merciless, Marduk and Death, Vlad along with co-conspirators Amphycion (bass) and Ilmar (drums) have just about done just that.

A sinister siren signals the start of the opening song ‘Black Death Communion’, but the intro is well and truly pierced by a riff sharper than a broken bottle in a Friday night scrap. Not a pleasant prospect, but then neither exactly are Necrowretch who fester and flounder in the kind of murky corners most people would cross the road to avoid. The opening number features Necrowretch in all their depraved and disturbed glory by the end of which you’ll pretty much know if they’re for you or not. ‘Feast Off Their Doom’ is another seismic satanic slab with Vlad almost impaling himself upon the bestial bile which is heaped higher than a council slag heap.

Barking and biting their way through every track, Necrowretch have the nihilistic streak of black metal veterans with a pummeling percussion throughout. The tracks do bleed into each other and the only respite from the ballistic barrage of French fury is ‘Infernal Imprecation’, which is essentially one minute of not very much at all. Instrumental is overstating it somewhat.

Necrowretch are back in business though with the closing ‘Mortem Ritu’ another reeling rendition of chaos and mayhem with Vlad not so much as singing, as heavy breathing his way through things. These musketeers like to charge head on into every song and the only thing left to do is draw your broadsword and ride along with them. 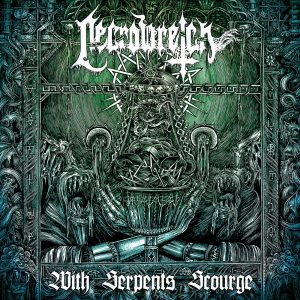