Black metal newcomers Necronautical wow Paul ‘pain in the Nec’ Castles with their black magic on The Endurance at Night, released via Cacophonous Records on 15 July 2016

Cacophonous is synonymous with groundbreaking black metal releases stretching back to its 80s heyday when dispatching nuggets from such esteemed names as Cradle of Filth and Dimmu Borgir. Having been reborn after a near two-decade sabatical last year, the second coming of Cacophonous Records has already provided us with a host of notable releases.

Arguably The Endurance at Night by Necronautical is the best yet. This is visionary black metal from one of the undoubted stars of the UK’s rising underground scene. The focus for the energy is the galaxy and all that it contains. As such this album is little short of an astrological aural assault course. 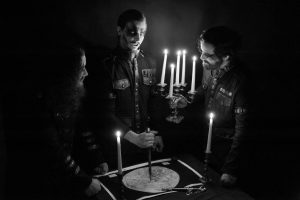 ‘Pure Moon’ is a rasping captivating opening blast in which Necronautical’s vivid and vivacious appetite for undulating symphonies of throat-ripping stature quickly assert. On ‘Nihilartikel’ the blackened swathes caress the peaks and troughs like a rolling hill within which a myriad of eco-fights erupt with the planet seemingly kicked around like a political football with a contagious riff that gets under your skin quicker than a tattoo gun.

The frenzied and feral delivery carries seamlessly into the storming ‘Spitzenkorper’ while the multi-layered grandeur of the at times overwhelming ‘Oceanus Procellarum ‘ invites comparisons with Anaal Nathrakh. The longest of the seven tracks is the 10-minute ‘Strom’. After a well-crafted scene-setting two-minute intro, the blastbeats takeover as a black metal deluge erupts, very nearly taking the ground from under your feet with its velocity and venom.

The album’s title track carries the stains and strains of those to have walked this blackened path before, Watain among them, a bestial race through the darkness. Final number ‘Theia’ is much more contained, the vocals drawn and weary rather than the probing prose of earlier. Dripping with atmosphere the momentum steadily climbs inexorably upwards. If the goal was to channel the energies of the stars, the sun and the moon then it’s reasonable to state that these ambitions have been eclipsed. 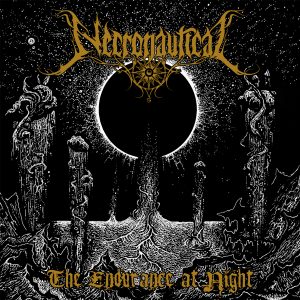