For most rock bands the vocals are the band’s signature, its identifier. Some, on losing their vocalist, like Journey and Foreigner, recruited a soundalike. But who was ever going to sound like Dan McCafferty? Even his name – a rough and tumble jumble of Irish and Scottish heritage – reflects his gravel throated vocalisms. After first choice replacement, Linton Osborne withdrew due to ill health, Carl Sentance was invited in on the basis of his taut, high presssure vocals on more recent Geezer Butler Band and Krokus recordings. His seize-the-day, nail-it-down performance on Tattooed On My Brain adds up to a near perfect Nazareth 2.1.

Only Pete Agnew, bass, remains of the original line-up. His son, Lee, drums, joined in 1999 and Jimmy Murrison, guitar, in 1994, and you have to say that this team sound re-energised around Sentance. TOMB is arguably their most consistent, inventive album for some time, It must have been tempting to crank up the weapons grade hard rock, and bludgeon an always forgiving fanbase into submission. But had that been the case the band would have just deadended into history.

That said, of course, they still aspire to the greatness of Led Zeppelin and the satellite bands who orbited their world. You can almost feel the constant seismic rumble of opener, ‘Never Dance With The Devil’ even before the music begins. The more immediate ‘State Of Emergency’ echoes that pounding rhythmic thump, with Murrison’s remarkably lean yet eminently anthemic axework soaring above the piston pumping grooves.

But it’s not all attitude and adrenaline. The title track has “great pop song” written through it like a stick of rock. With a springloaded guitar motif lifted from Blur’s songbook  (allegedly), and a tune picked straight from the Rivers Cuomo/Weezer jukebox, this irrepressibly hooky song sends out a message … we might be fifty years into a career that seems unending, but there’s no sell-by date here … and we’re still 19 in the head.

‘Pole To Pole’ resurrects the old Nazz. It has the hypnotic, helter skelter rhythm of a runaway train, daring you to defy the imperative, but it’s just camouflage for rock’n’roll with a heart of gold, accessible, immediate, engaging. Whereas fiercely conflicted love song, ‘Don’t Throw Your Love Away’ is a real challenge, a grinding regression to the neanderthal beginnings of heavy metal, with Sentance reaching up successfully to the limit of his range.

It takes several listens to grasp the complexities of ‘Push’ and ‘The Secret Is Out’, a kind of two part, Mississippi Delta love song. At face value there’s not much more than the eerie echo of Murrison’s swampy riffing and the rhythm section’s shuffle beats, set against Sentance’s lazy drawl in part one. But the follow on track moves away from the first song’s loosely constructed knot of Zydeco bluesrock stylings, sidestepping into bruising hard rock territory by adding a steamroller riff and a loping hard rock groove. Surprise after surprise.

And that’s really the story of TOMB, everyone’s raised their game and clearly, the passion still burns brightly. Maybe we shouldn’t be surprised, if ever a band made a statement, Tattooed On My Brain is it. 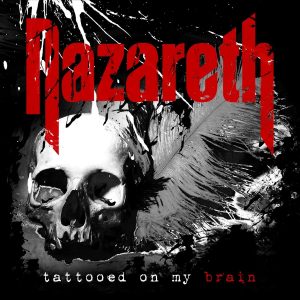