Is there a doctor in the house?

Paul ‘pass me a scalpel’ Castles does his best to dissect the debut album from Spanish death gore fiends Nasty Surgeons, released via Xtreem Music on January 15, 2017.

You wouldn’t necessarily know it from their anglicized band name but Nasty Surgeons do in fact hail from Spain. But of more importance than their native land is what they actually do and in this case the answer is a death metal/grind coupling of the kind that has become the forte of Spanish label Xtreem Music in recent years.

Further confirmation – should you require it – as to which side of the metal fence Nasty Surgeons stand is made crystal clear from the coffin theme sleeve artwork, the ornate but indecipherable band logo and song titles such as ‘Antemortem Dissection’ and ‘Burnt With Sulfuric Acid’.

Having come up with the name, Nasty Surgeons have set about writing 10 songs all with a medical theme running through them. With so much blood and guts swilling around your average hospital corridor the Spaniards seemed to have very little difficulty in achieving this.

The good thing about this album is that it actually works very well. While the hospital reference points have that constant drip drip effect (get it!) there’s enough different sonic strands thread into their operating theatre of hate to make Exhumation Requiem a pretty good album. Although velocity levels are intense at times, speed is not the only card Nasty Surgeons have lodged up their infected sleeve.

Opener ‘The Resurrectionists’ casts a spell of impending doom across the ward during its instrumental lead in before the Nasty Surgeons arrive brandishing their Victorian treasure chest of malignant instruments (medical, not musical!). All hell erupts and by the sounds of it that’s exactly where this lot are heading as the blastbeats kick in and a deathly growl starts to spew forth a bedpan of bile.

‘Human Flesh is so Food’ is another ravenous track that races by with barking vitriolic lyrics, pummeling percussive beats and even thrashier riffage as Nasty Surgeons crack the whip from pillar to post.

Things get even meatier on ‘Antemortem Dissection’ which opens up, literally, with what sounds like a person being disemboweled while they’re still alive. Not good. A standard death metal tempo slows to a crawl later on as a siren like whine asserts before the pendulum again swings back, probably hitting the beleaguered patient along the way.

The thunder starts to crack even more fiercely on the apocalyptic ‘Autopsy’s Protocol’ with cavernous breakdowns injected to slow and then build up momentum as Nasty Surgeons find themselves elbow deep in guttural gore. The self-titled ‘Nasty Surgeons’ opens with a groove catchier than a hospital bed bug while ‘Ode To Bad Taste’ is another blisteringly raw barrage of cadaver crushing riffs.  As for ‘Burnt with Sulfuric Acid,’ well I think that can be filed under ‘facemelter’.

As if to seal Nasty Surgeon’s reputation for having an appalling bedside manner, album title track closer ‘Exhumation Requiem’ features a fuzzed up funeral march at the start before one final eruption of medical mayhem that would strike fear in the patients’ waiting room. It’s fair to say that Nasty Surgeons won’t be asked to do any promo work for the NHS any time soon. 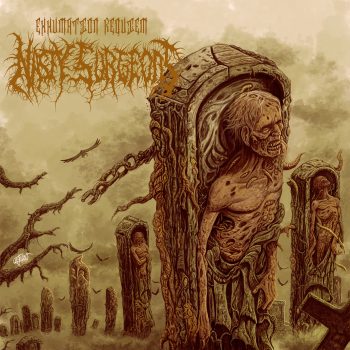