In the Napalm of your hand…

Paul Castles gets positively steamrollered by a crushing compendium of Napalm Death sonic shrapnel, released via Century Media on 30 March 2018

There are few names within the confines of extreme music that generate quite the same blend of excitement and respect as Napalm Death. Generally acknowledged as the Godfathers of Grind, Napalm Death have almost gone as far as to reinvent the musical wheel with their explosive snapbites in which anything over 90 seconds is almost seen as Napalm prog.

Since their formation in the West Midlands 30 years ago Napalm Death have dropped more hand grenades than a rookie private. Having lit the touchpaper on 15 albums across the intervening three decades they have been a constant thorn in the side of authority, challenging the political elite with their sweeping avalanche of finely penned politico thoughts and attacks.

Coded Smears and More Uncommon Slurs is not strictly a new album in the true sense. Most of the cuts here, and there are no less than 31 of them, have appeared down the years as assorted B sides, exports, splits and other jamboree bags of Napalm rarities. Only the most hardened Napalm fan – of which there are admittedly many – is likely to have more than half of these incendiary songs already safely tucked away in their musical locker.

So this double album, with a running time of an hour and a half, will still be a welcome buy for most fans. As ever, Napalm Death don’t have to take the gloves off to kick-start the torrent of aural angst and aggression. They never really put the gloves on in the first place as evidenced by combustible album opener ‘Standardization,’ which first saw daylight as the bonus track on 2011 album Utilitarian. The full violent impact of Napalm Death is felt further in the first few inimitable killer blows, notably on ‘It Failed To Explode’ and the pummeling ‘Losers‘. ‘We Hunt in Packs’ is a salivating monster of a song that only those in possession of the Japanese version of the Time Waits For No Slave album (2008) will recognise.

It’s not often that they go down different musical avenues although they do just that on the slow (by Napalm standards!) ‘Oxygen of Duplicity’ an unexpectedly haunting number that first surfaced on a 2013 split EP in tandem with the Melvins. ‘Critical Gluttonous Mass’ is a more conventional Napalm track, a bonus song from the Apex Predator – Easy Meat album sessions (2014).

Being in a bad mood for 30 years takes some doing but this album certainly shows that Barney Greenway and Shane Embury have managed it. That’s not entirely fair of course as there’s plenty in the world to still get riled about and the legendary Napalm lynch men only have to stomach five minutes of the 6 O’Clock News before another song comes crawling out of the sewer. The first disc ends with a riotous cover of the Cardiacs’ ‘To Go Off and Things’.

There’s no letting up on the second disc with ‘What is Past is Prologue’ a notable early firework, another bonus track from the Apex Predator – Easy Meat album. The second disc also features a triumvirate of cover songs, giving Napalm the chance to tear up someone else’s music rather than their own. ‘Will By Mouth’ from a 2012 split EP with Converge further fans the flames. ‘Omnipresent Knife in Your Back’ is a shuddering track – a bonus from the 2008 Time Waits For No Slave album – revealing a more intimate, rarely glimpsed view of the grind warriors. Much the same can be said of ‘Athiest Runt’ a six-minute marathon.

Napalm’s stage presence has always been so close to the edge as to be compulsive entertainment with Barney’s inimitable twitch dance movements impossible to take your eyes off. It’s no surprise to learn that Slayer have asked them to hook up for their US farewell tour this year. The next opportunity for UK fans to feel the febrile force will be at Desertfest next month where their machine gun delivery will provide a healthy contrast to the majority of the psychedelia and fuzzed up feedback acts more readily associated with the annual three-day festival in Camden, north London. 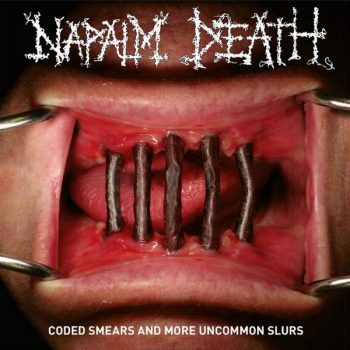