California’s powerviolence / grindcore / hardcore / ear-cleaving / brain-battering trio Nails waste very little time, if any at all. Their 2009 debut EP Obscene Humanity was 11-ish minutes, their first “full length”, 2010’s Unsilent Death chimed in at just under the 14 minute mark, their two tracks on the 2012 split with Skin Like Iron totalled 2 minutes 24 seconds, the 2013 album Abandon All Life killed it at 17 minutes, and now their third album, You Will Never Be One Of Us, stretches to a whopping 21 minutes. I know! They’ll be making a four-disc prog album with accompanying overblown tour and self-indulgent movie next! Well, no they won’t (thankfully) because 21 minutes is all Nails need to lay everything to waste.

Unnerving samples open the album and the unwavering and unforgiving violence of the title track erupts. In 89 seconds, Nails shift through an array of ferocious riffs that rip, tear and groove their way into the skull. ‘Friend to All’s 45 seconds is strewn with jarring tempo and groove shifts that are as disorienting as they are pummelling. To say that ‘Made To Make You Fall’ and ‘Life Is A Death Sentence’ are aggressive is an understatement, to say the least. Throw some warped and contorted lead-work into ‘Violence Is Forever’ and the abrasive is augmented by the maniacal.

Death metal stains the harsh ‘Savage Intolerance’, the barrage of ‘In Pain’ is massacred with a 20-second Kerry King-esque wails-and-divebombs lead break, and ‘Parasite’ and ‘Into Quietus’ battle it out for the Heaviest Track Of All Time Accolade. Then we get ‘They Come Crawling Back’. If you thought ‘Violence Is Forever’ at 3 minutes 26 seconds (80 seconds longer than the longest of the other 8 tracks) was Nails pushing themselves, then the 8 minutes and 14 seconds of this faultless track will blow you away (we may get that prog album after all…).

Okay, so some of the riffs may be interchangeable and structurally there are a few similarities but this is tighter than a fist up a nun’s chuff and harsher than the damnation awaiting her in the pits of hell. You Will Never Be One Of Us is just fucking ridiculous: ridiculously well written, ridiculously well produced by Converge’s Kurt Ballou, and ridiculously well executed. Think you’ve heard heavy? Listen to this. It’s probably taken you longer to read this review than it will to listen to the album. You’ve wasted enough time already. Go get it. Now. And bring a weapon. 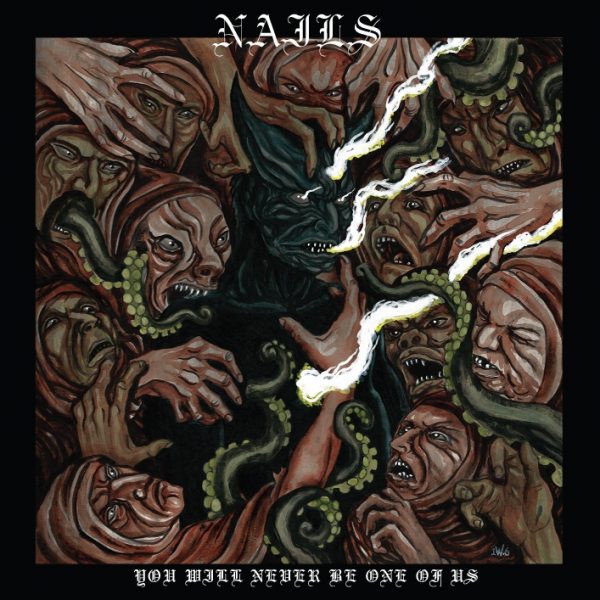