Century Media Records have announced that Swedish Black Metal legends NAGLFAR will join the ranks of the re-scheduled third leg of PRIMORDIAL’s ‘Heathen Crusade’ tour across Europe in April.

The tour includes two UK stop-offs, Birmingham Asylum on 11 April with a London show the following night – full details below.

While Primordial continue to promote their highly acclaimed latest studio album, Exile Amongst The Ruins, which was released worldwide via Metal Blade Records in 2018, Naglfar are touring their new album Cerecloth, which was released via Century Media in May.

Primordial vocalist A.A. Nemtheanga said: “What can we say? 2020 has been dark, we hope for a shard of light in 2021 and announce the Heathen Crusade once more for April 2021. Naglfar join us on the field of battle and Rome again will open! We hope you still have your will power and sanity left! Stand strong and we will see you all next year we hope!”

Andreas Nilsson from Naglfar also commented about joining the tour: “Together with Primordial we have decided to embark on a sonic crusade across Europe. We have been eagerly awaiting this. The time has come to shroud the world in Cerecloth.”

It has been a long eight-year stretch between releases for Umeå, Sweden’s black metal nihilists Naglfar. They have returned from their respite ferocious and hungry with their seventh full-length album Cerecloth (reviewed here). Recorded and mixed by Naglfar guitarist Marcus Norman at Wolf’s Lair Studio, and mastered by Dan Swanö at Unisound, the underlying musical and lyrical themes of the album were succinctly and confidently described by guitarist Andreas Nilsson: “The usual death and destruction.”

Judging from Andreas’ curt description, and the grim, ghostly cover art from the renowned artist Kristian Wåhlin and layout by Seiya Ogino of Ogino Design certain death is exactly what Cerecloth holds within. 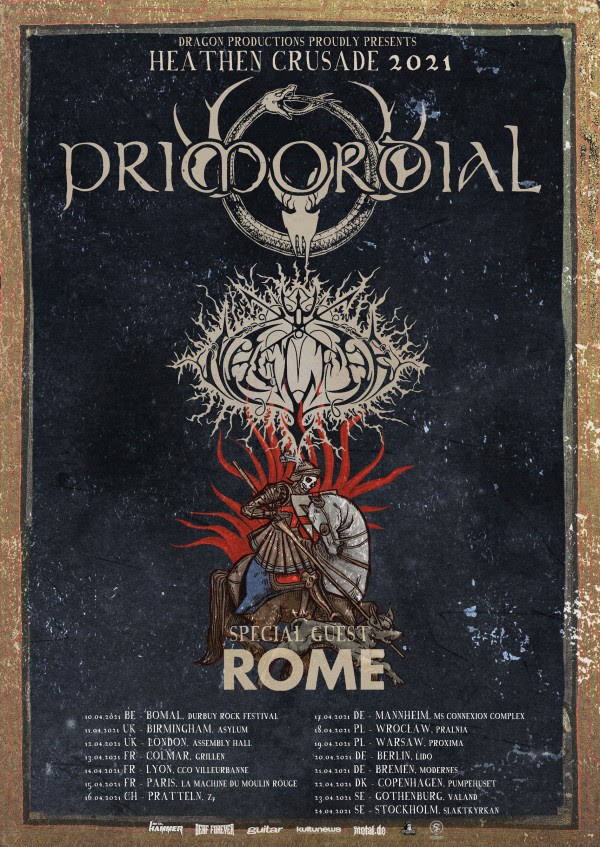