Out of this world

Paul Castles gets a glimpse of a different world through the eyes of Mussorgski’s commanding album Creatio Cosmicam Bestiae, recently released via Godz ov War Productions.

Mussorgski may well be a solo project but you would be hard pushed to believe it when Creatio Cosmicam Bestiae is ripping your speakers to shreds. The individual causing the damage is Khorzon who largely made his name through the exploits of Polish black metal outfit Arkona.

Since launching his own ship Mussorgski onto the high seas of blackened ambient waves, he has released two albums with Creatio Cosmicam Bestiae now making it three. While Arkona pursued a traditional black metal path, Mussorgski go down an altogether more diverse path with a myriad of complex compositions that at times require the mathematical skills of an Oxbridge graduate to unravel.

The futuristic sleeve hints at a cosmically charged soundscape and these eight tracks certainly fall under that label with the feeling of the bigger questions being asked given further credence with song titles such as ‘Key To The Universe’. Although dark and atmospheric Mussorgski’s music is not your standard black metal diet of upturned crucifixes and slabs of Satanic bile – as welcome as those traits are. No, this soundtrack in many ways is even colder, less human with a more industrial crust layered across the top.

The first track ‘Gaaya – The Planet Of The Dead’ sounds initally as though you’re watching sound great blockbuster movie before a rousing drone asserts, a deathly cry is released, and the menacingly methodical pounding kicks in. It is an absolutely epic album opener that hooks you right from the off and then simply tightens its grip as the aural attack builds into a crushing symphonic finale.

Again the dark outer worlds are explored in ‘God Is In The Neurons’ although this a very different kind of piece, a penetrating high-pitched groove that furrows into your skull over which some abstract indecipherable mutterings systematically spew forth in an almost robotic-like subhuman tongue. Further into the explorative process a more musical feel takes hold as a traditional black metal feel envelopes the sound but while still gripped under a distinct symphonic shroud, one that by the song’s destructive end almost certainly lies in shreds.

Vocals take a backseat on the instrumental intrigue of ‘Stellar Core’ but quickly return on the well named ‘Sabbathum In Perpetuum’, albeit in a steady succession of fork-tongue spoken words before an incendiary explosion of vitriolic fury launches the track down a more conventional path of black metal fury played out over a twisting tableau of incessant blastbeats. A swirling violin strokes up a haunting end to one of the album’s standout tracks, full of gothic grandeur and frenzied futuristic sweeps.

‘Key To The Universe’ is another mixed affair with a rousing stomp of an opening sharing space with spoken vocals layered on top of a bleak ambient background. ‘Implanted Consciousness’ is a slowburner that gathers pace like a thoroughbred, a rasping serrated riff cutting through the smoky atmosphere with cold hostile vocals maintaining the intensity towards an almost orchestral flourish of a finish.

Creatio Cosmicam Bestiae closes with the compelling ‘Paradisum’ which grips you from the off with its suffocating atmospheric soundtrack peppered by pained cries. While Khorzon has contributed all the music and some of the vocals, additional vocals come courtesy of Ravn (ex-Taran, Warfist) while occasional female frequencies also deliver further dramatic dimensions to Mussorgski’s kaleidoscopic, and at times quite emotive, package.

The synths, such as on the album closer, also provide an additional flavour while the end of the world apocalyptic vibe contained within Creatio Cosmicam Bestiae at times carries shades of Rotting Christ and Anaal Nathrakh. If you want to know what the end of the world sounds like, this may at least give you some idea. 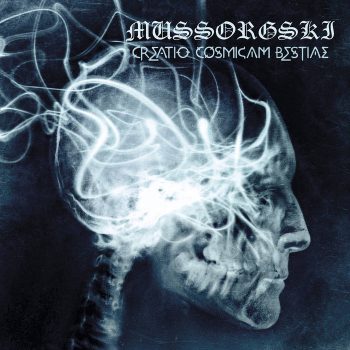