Forget everything you’ve heard about the potential future of Motorhead. Forget Lemmy’s health, forget worrying about how far you might have to go to see their next show for fear it might be the last, forget whether ‘Aftershock’ might be the last album the band tour, or their last ever. That’s not what Motorhead’s about. They’re not a nostalgia act, and never have been; Lemmy could drop dead tomorrow and he’d still cite ‘Aftershock’ as the pinnacle of his musical achievement, as long as people listened to it.

Of course, a critic can’t afford such affectation; a true critic also shouldn’t be grinning like a lunatic at an album’s opening track and mentally planning an ‘album of the year’ review. ‘Heartbreaker’ rips straight in with a “why didn’t I come up with that” riff that hundreds of lesser bands should lose sleep over, and displays exactly why outfits like Metallica and Avenged Sevenfold still tip their hat to the ‘head.

Second tune ‘Coup De Grace’ is sadly a little ‘by-the-numbers’, inviting the uneasy feeling that the band have shot their collective musical load too early; thankfully it’s quickly dispelled. Should veteran producer Cameron Webb have wished to take off the rough edges ‘Lost Woman Blues’ could be from any number of new blues hot-shots’ critically-acclaimed, endorsement-whoring releases, except for that inescapable Kilminster rasp and the raggedness which makes it intrinsically Motorhead – and it leads into a handful of rabble-rousing anthems worthy of any of the band’s halcyon releases.

There’s some refreshingly subtle lyricism on display alongside the stuff that’s just old-school Motorhead: the ‘I know I got to live, I know I’m gonna die…nobody knows where we cross the line’ motif on ‘End Of Time’ is a perfect continuation of the nihilistic attitude on display throughout Lemmy’s writing, but there’s also a spot of social commentary and what may or may not be political opining going on as well.

In amongst the trademark riffage there’s some wild card tracks – ‘Dust And Glass’ is a reverb-infused ZZ Top-esque slow blues with some superb guitar work from the flawless-throughout Phil Campbell, ‘Death Machine’ invokes Hendrix’s ‘Foxy Lady’ with added bpm and attitude, and ‘Silence When You Speak To Me’ practically lifts Alice In Chains’ ‘Man In The Box’ wholesale, adding some cheesetastic lyrics worthy of Bad News.

But holy shit, ‘Going To Mexico’ sounds like classic ‘head, replete with hyperspeed guitar chugging and Mikkey Dee’s obligatory double kick-drum; if you want something to replace ‘Ace Of Spades’ on your driving soundtrack (and you should by now) this is it. There might be a few numbers on ‘Aftershock’ which are nothing more than you might expect, but there are certainly none which incite the fast-forward reflex, and a few which could be genuinely termed ‘classics’. ‘Keep Your Powder Dry’ and ‘Paralysed’ round off ‘Aftershock”s 47-odd minutes in style, a grooving rocker and punk-metal sprint-for-the-finish respectively.

Is it as ground-breaking as ‘Overkill’? Of course not, but that was over three decades ago. Is it a group of over-the-hill rockers looking for one last paycheque to eke out their retirement? Absolutely not. What ‘Aftershock’ represents is the best album released by a band of British metal stalwarts in many of their listeners’ living memory, hitting their recording stride again after too long in the studio wilderness. Long may they continue. 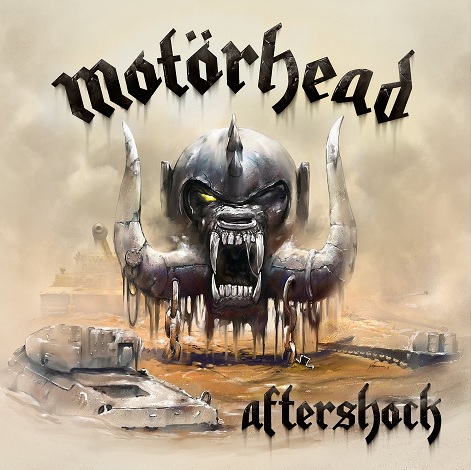