What would normally have been one of Mostly Autumn’s routine, twice yearly, visits to the Robin turned out to be something a little different, and in the end made the gig that little bit more memorable. The gig was originally arranged for early December, but that just happened to be the weekend of the heavy snowfall, so with the band having to travel down from York, and many of the prospective gig-goers having a difficulty in making the trip to the Robin, the band elected to rearrange it, but to get the earliest possible new date, and with the Robin’s diary rapidly filling up, the band elected to play an afternoon show. It seemed very un-rock and roll to have a gig with the doors opening at 12 noon and the band due on at 1pm, but it was a pleasant surprise to see that the gig drew a very decent crowd, and it was an interesting feeling to be exiting a gig in January in what was left of the daylight, although it seemed the band had to shorten their normal set so that the band due to play in the evening could commence their set-up. 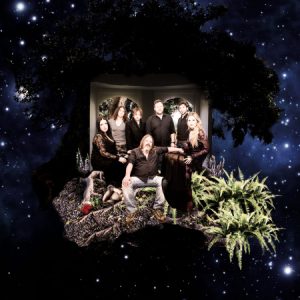 This series of gigs is in support of the band’s latest album, ‘Sight of Day’, which is arguably the best by the current line up, and naturally songs from the album featured heavily in the set, which opened with the title track, the longest track the band have ever recorded in the studio. It goes through several moods in its 14-plus minutes, although I was particularly taken with a section near the end which featured keyboard maestro Iain Jennings employing a good old fashioned Deep Purple like, Hammond organ sound.

Although the set was dominated by newer material, there were plenty of older songs to enjoy too. The timeless ‘Evergreen’ is always good to hear, as is Chris Johnson’s fragile epic ‘Silver Glass’, with a typically fine guitar solo from Bryan Josh. The old set closer, and another epic, ‘Mother Nature’, also  made a welcome appearance in the second half, before the main set closed with a slightly rearranged ‘Heroes Never Die’, all the more poignant with the tragically early death of the band’s former guitarist Liam Davison still fresh in the memory. The newer songs, especially from ‘Sight Of Day’ haven’t had the same chance to bury themselves in your consciousness, and, title track apart, to some extent are still finding their feet in the live setting. ‘Native Spirit’ for example, seemed to drag a little, although I liked Iain Jennings’ synthesiser part, and similarly ‘Changing Lives’, where Chris Johnson takes lead vocal, and his attempt to get a singalong going was probably handicapped by most of the crowd’s unfamiliarity with the song.

When considering Mostly Autumn, it’s always worth mentioning that the musicianship is rarely less than excellent, and often outstanding, so a special mention for Iain Jennings and Angela Gordon on the keyboards, who were both terrific, although it was a bit disappointing that her flute playing was comparatively under used compared to previous gigs. As for Bryan Josh, his guitar playing has always been something special. He might not dazzle you with flurries of notes and technique, but for feel and emotion, he’s right up there with Steve Rothery as far as I am concerned, and one of the most underrated guitarists on the whole scene.

One thing I think the band can be criticised for, though, is the constant coming and going of the various band members during the set. There was rarely a song played that didn’t involve someone leaving or entering the stage, which was not only quite distracting at times, especially when it occurred during a song, but it also led to a couple of very odd situations, including one where Olivia Sparrnen had left the stage while Bryan Josh had taken a lead vocal, only for to re-emerge, sing one line and then exit again for the rest of the song, and then, at the end of the main set, during the band’s anthem ‘Heroes Never Die’, she left again while the song reached its climax, and Bryan Josh played what is probably his signature guitar solo, only for the song to end and the band to take their initial bow without her actually being on stage. Yes, obviously the band were going to do an encore, but it was still an awkward thing to see.

In the end, the idea of having an afternoon gig worked really well, and might be something other bands could consider in future, as there was a healthy crowd and a good atmosphere. The band are always well worth seeing, played well on the day, and overall, it was a good afternoon out. The band return to The Robin on Sunday June 3rd, although presumably, this one will be held in the evening.