Doom at its scary best

When a band targets a Halloween release the likelihood is that its content is going to be filled with more passages of horror than an old Bela Lugosi movie. In that respect, the new two-track EP from Hampshire harbingers of doom, Moss, gets the thumbs up from the tarot reader. The two tracks presented at the altar are ‘Carmillia (Marcilla)’ and ‘Spectral Vision’s. The contents of this metaphorical black magic box of tricks will not come as a revelation to anyone familiar with Moss’s languid brand of funereal doom. When fast twitch fibres were being handed out at birth this trio were clearly at the back of the queue. If they drive like they play they would rarely drift over from the hard shoulder.

The first of the two tracks – both of which slumber along for almost 10 minutes is ‘Carmillia (Marcilla)’. This behemoth doesn’t so much as stir itself into life as wipe the sleep from its eyes against a constant demonic drone. It gradually plateaus into a crumbling gothic sermon with a distinctly 70s vibe adding to the suffocating heaviness. Singer Olly Pearson delicately dresses things up but the curtains are left shut to ensure that none of the darkness is allowed to escape. As funereal doom goes, let’s just say the hearse has the engine running. The ambience is chilling with a deathly riff slowly clawing its way into your soul, whining like a banshee as it does so. Slowly, of course. Second track ‘Spectral Visions’ is more fuzzed up, a pounding beat grinding you down as Olly wails ‘can you feel it taking over your mind’. Too right we do Olly! Hypnotic, atmospheric and with evil throbs throughout, this is doom at its scary best. 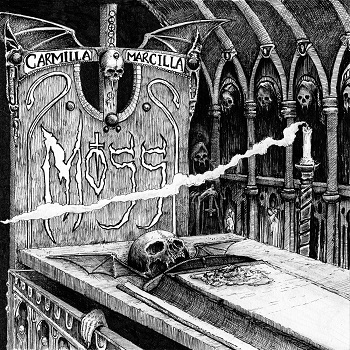