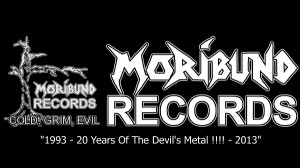 Moribund Records are a favourite here at Midlands Rocks (click here for a list of reviews of albums and interviews with bands from the label), and for good reason. And here are two more very good reasons, Wormreich and Pact, both of which bring us their sophomore releases.

In the meantime, read both reviews or click on the band names above to go directly to their review.

That the trio that make up Wormreich are from the bible belt of the good ol’ USA (specifically Tennessee, Kentucky, and Alabama) shouldn’t come as much of a surprise really, should it? Surrounded by happy clappers and sycophantic dogmatists, what better place is there for the distillation and distribution of the devil’s destructive diatribes? The product of such a culture must surely be a potent one, and yes, album number two (and first for me) from Wormreich, Wormcult Revelations, is exactly that, exuding evil from its every pore.

The first of four ‘Revelation’s, the ritualistic chants that open ‘Revelation I: Vox In Rama’ are soon destroyed by the beast that the mass of seething guitars, militaristic drums, and inhuman vocals makes up. With ‘Revelation II: Serpents Of Choronzon’, Wormreich’s mission to obliterate order and obedience is underway. The first of two instrumentals, the two-minute ambient ‘Share-Maveth’ brings a respite, of sorts at least. There’s something ethereal about it, something grand, something curiously welcoming, as if witnessing the dark figure on the album cover rising from the abyss, his powers beginning to flood into the realm of mortal man, fuel for the uncompromising assault that both ‘Revelation III: Devotion’s Final War’ and ‘Revelation IV: Enim Satanas Meum Sanguinem’ both embody. And with the dark ambiance of ‘Codex Lvciferivm’ comes emancipation. The presence felt at the beginning and the powers emerging throughout the album are now manifest, the ritual complete.

Wormreich’s second album is damned-near perfect. Ironically, what lets it down is the cover of Deathspell Omega’s ‘Malign Paradigm’. A great track from a great band, Wormreich’s version is just as great, but it was enough to close Wormcult Revelations with ‘Codex Lvciferivm’. Cacophonic and chaotic, controlled and concentrated, ruthless and unwavering in its determination, if pride – putting oneself before God – be the deadliest of the seven sins, then Wormreich have monopolised it.

Pact – The Infernal Hierarchies, Penetrating the Threshold of Night

Pact’s 2012 debut, The Dragon Lineage of Satan, was as ridiculously harsh as it was ridiculously nihilistic, and as ridiculously sadistic as it was a ridiculously unstoppable barrage of blackened bilious aggression. Rammed with blood-vessel-bursting blastbeats, razor-sharp rectum-ripping riffs, and vicious, violent and volatile vocals, it bled pure filth from every pore. And the artwork – tackle out, the Pope and a nun stood chained to a pedestal upon which is perched the mighty Satan – was about as not-beating-about-the-bush as you could get. Nope, Pact don’t do subtlety.

2014 and here we are with album number two, The Infernal Hierarchies, Penetrating the Threshold of Night, and Pact are still about as subtle as being hit in the face with the Krakken. No fillers and even less in the way of frills, Pact’s tirade against herd morality is diabolical to the nth degree and then some. Chaotic and fierce throughout, Pact have packed their ire into nine tracks of uncompromising and relentless hatred and misanthropy to make an album that is utterly unforgiving. Stand in the way of this and the dark abyss shall be yours and yours alone. In the last two years, Pact have dug themselves deep into the underworld, gorged themselves on all things brutal, barbarous, and resolutely individual and returned to the surface with an album that is just fucking nasty. There are no hidden messages or mysteries to discover with Pact. It’s all right there, breathing its blackened purity right in your face. Brutal, black, and beautiful.