When breakout artist Morgan Wade made her first full-length album Reckless, it was a fistful of songs torn from the life of a girl not afraid of pushing life to the edge. Bold and startling, the guitars pushed forward and her voice – equal parts husky knowing, brassy want and innocence – signaled a deeper connection to the faltering places, desires torn open and the willingness to wrap mental health, drinking and its fall-out, even drugs into her unfaltering merge of Tom Petty-esque lean rock, classic country acoustic guitars, a beat that means business and sweeping melodies that pull listeners into the songs. Offering six additional tracks, Reckless (Deluxe Edition) arrives January 28th.

When the dust settled on 2021, Reckless topped Rolling Stone Country’s 25 Best Country and Americana Albums list. But it resonated across critical, commercial and country press as it sat at No. 4 on 10 Best Country Albums lists from both cutting-edge all-genre site Stereogum and Taste of Country, No. 5 at Billboard, and No. 13 on Rolling Stone’s all-genre Top 50 Albums, the outlet proclaiming, “Wade is so deft at conjuring the head-over-heels feeling of plunging into a relationship and the subsequent heartbreak that she sometimes seems to be pinpointing the exact moment where one blurs into the other.” The Tennessean, Wide Open Country, Boston Globe and more celebrated the 10-song collection as one of the year’s best offerings. 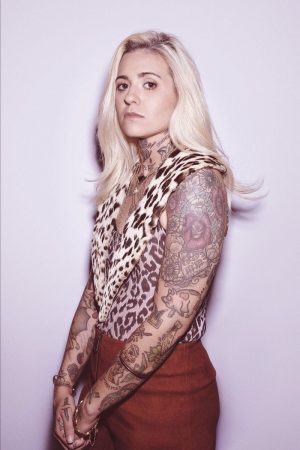 Equally compelling was ‘Wilder Days’, which is currently on the BBC Radio 2 A-List and featured as their Record Of The Week over the Christmas period. The song also found its way to both TIME and Rolling Stone magazines’ 10 Best and 50 Best Songs of the Year at 9 and 14, respectively. Rolling Stone offered, “apart from delivering the year’s most irresistible country-rock chorus, Wade’s debut single, complete with a gentle nod to Guy Clark’s ‘Desperadoes Waiting on a Train,’ established Wade as a moving storyteller: The narrator is falling for someone so hard they begin to feel misplaced nostalgia for the past versions of their love interest they never knew.”

“I wrote to save myself,” Wade allows of her to-the-bone songs. “It’s something that benefitted me throughout childhood. I didn’t share it with anybody, but I could be honest with myself. I didn’t have to worry about what anyone else thought… and (now) I’ve had these great big men come up to me after shows to tell me I’m saying what everybody’s thinking.

“So I figure if I keep saying the things I want to say, people are going to be thinking them, running straight into those feelings.”

More of those feelings inform the expanded Deluxe version of Reckless, the album people are talking about. Co-produced by Jason Isbell + the 400 Unit Guitarist Sadler Vaden and Paul Ebersold, the Deluxe pulls in a scalding, heart beating read on Elvis Presley’s ‘Suspicious Minds’, the desperate staring a hole in the abyss ‘The Night’ – Wade’s first release – and some of the other songs that were in the conversation around Reckless’ near-perfect core sample of life as a passionate, tattooed 20-something smacked against a rapidly changing world.

The gently tumbling ‘Run’ drops today. A yearning song of wishing to be anywhere but there, Wade’s voice flutters through the trapped small town kid’s truth: “What if we run, what if we get away/ There ain’t a single reason for us to stay… Can we fly somewhere foreign, get me high and mess me up until the morning.” Feather-light, it captures the hunger for more and the way kids cope. ‘Run’ serves as a reality check for anyone in a dead-end job, bad romance or hopes for something more.

It also sets Wade up as our lady of displaced souls. The Blue Ridge Mountain girl is willing to put her whole truth out there as an artist without flinching – and as a performer who gives it all away onstage. As she says, “Honestly, the more exposed I am, the better it makes me feel. There are a million fake people out there, and who needs more of those? Who listens to them? Or believes it? If you’re struggling, and you put it out there, people actually say, ‘I really connected with (whatever the content).’ In making other people feel less alone, somehow I’m less alone. So I give away my feelings, then I get a sense I’m not the only one.”

Morgan Wade will be visiting the UK in March, for the first time since the release of Reckless. She will be performing on the main stage of C2C festival as part of their Introducing Nashville series, which see artists taking the stage together in an acoustic line-up to share the stories behind their songs. For more information about Introducing Nashville, visit IntroducingNashville.com