That Bob Daisley has had a few good ideas in his time. As Gary Moore’s long time producer and bass player he suggested that maybe recording a blues album might be a good idea…safe to say he was right. More recently, he had the brainwave to record a tribute album to his old guv’nor – aided and abetted by a crack rhythm section and a glittering array of friends, fans and peers, and here it is, ‘Moore Blues For Gary’.

We begin with a faithful, sympathetic take on a Moore blues staple, not trying at all to outdo the original…but then, how could it? However, it’s when the guest stars arrive that things begin to heat up. ‘The Blues Just Got Sadder’ boasts a dream team of Joe Lynn Turner on vocals and Toto’s Steve Lukather on guitar, getting a rare chance to shred the blues in some considerable style.

And we’re off! ‘Empty Rooms’ is lovely, more subdued than the original but equally affecting, Gary Moore sidekick Neil Carter (who co-wrote the song) handles vocal duties with considerable aplomb. None of this has Moore’s bite and attack but this feels deliberate, we’re going for a respectful vibe here.

There is a nice mix of styles and emotions too. We gear change from Brush Shiels (frontman of Gary’s first band – Skid Row) off the leash version of ‘Texas Strut’ to Glenn Hughes mellow, acoustic with strings (well, cello) take of ‘Nothing’s The Same’ – not what you’d expect from the normally bombastic Mr.H but all the more moving for that very reason.

Don Airey (Deep Purple) and Doug Aldrich team up and play their hearts out on instrumental, ‘The Loner’, managing to both scorch and pull on the heartstrings while Black Star Rider’s Damon Johnson gives us a slow-burn, broodingly heavy take on ‘Don’t Believe A Word’. Moores’ sons Gus and Jack even appear, tackling vocals and guitar on ‘This One’s For You’.

It’s hard to pick a stand out track on an album full of them but a few tracks merit a special mention. Joe Lynn Turner reappears with Night Ranger’s Jeff Watson for a wild, crunching ‘Power Of The Blues’, a genuine bruiser that doesn’t pull it’s punches while Ricky Warwick and Steve Morse team up for ‘Parisienne Walkways’ – Warwick is more than used to handling Lynott’s vocals while Morse is more than up to the challenge, hitting that note with clarity and finesse.

And let’s not forget ‘Still Got The Blues’ – Danny Bowes reminding us what a damn fine rock vocalist he is (a recent internet vote put him 2nd ever to Freddie Mercury), powerful and soulful in equal measure, while we are also treated to a rare sighting of John Sykes on guitar. The gloves come off and he tears it up in rare style, shredding away into the ether.

This is a fine album. Full of great songs, wonderful production and performances filled with love and fire. Daisey has created one of the great tribute albums, an album that stands up in its own right. Not cobbled together, rushed or phoned in, everyone who plays on this clearly wanted to be there and Daisey’s greatest skill was in creating combinations and pairings of artists who absolutely gel and fly together. The chemistry is palpable and exhilarating on every single track. Gary, you feel, would have loved this. 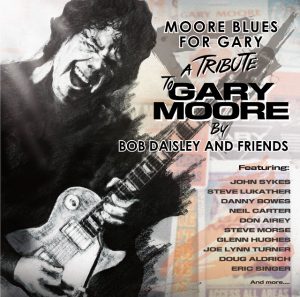