Ian Savage steps smokily back in time with a double dose of Monster Magnet, reissued by Napalm Records on September 1 2017

I’m not wholly sure who asked for these reissues to be put out together. Much as Monster Magnet have semi-cemented their legacy as the 90s’ seminal stoner-rock band, they’ve been one of the few bands of that era who have developed, evolved and improved since their inception, and mightn’t want to remind fans of their hit-and-miss past.

These guys have been combining dope and rock music since 1989. Their first full album was 1991’s Spine of God, which we’ll come to in a minute; their ‘breakthrough’  for Caroline Records was the ‘Murder/Tractor’ seven-inch and the initially-unreleased Tab mini-album.

The single isn’t included in these re-releases. It can be found on YouTube, should you wish; I wouldn’t bother. Though punchier than the 30-minute-long title track of Tab, it’s in no way better – the sound of a band struggling to find their sound and largely failing. This continues throughout the reissued EP; even the uptempo ’25’ fails to redeem the remainder. Frankly, ‘Lord 13’ seems to be there solely to take the piss out of anyone buying it, unless they’re REALLY high.

So, gratefully, we put ‘Tab’ behind us. Oh, so gratefully – now we have a well-produced album reissue with some balls which gives an idea of where MM were heading. The guitars on Spine of God have chutzpah, the drums aren’t permanently in the background, the vocals are front-and-centre, and we’re taken on a worthwhile journey.

There’s sleazy riffage worthy of of 90s compadres  Skid Row in ‘Snake Dance’ and ‘Sin’s A Good Man’s Brother’, amongst the stoner-rock we’d been accustomed to, and Zepplin-esque stretched-out choruses… and ‘Doom Scene’ and closer ‘Zodiac Lung’ (plus demo version) stretch it out further for those who’ve already rolled one in anticipation.

Spine of God is a good album for its time and for its audience, I don’t think any fan of Monster Magnet will dispute that… but re-releasing it alongside Tab devalues it. The second reissue is where it’s at, if there can indeed be a place to ‘be at’ with a reissue of a 26-year-old album.

It’s a time capsule you can still get something out of, with the right chemicals… you’ll know if if Spine of God isn’t your thing, in the same way that people 26 years ago did. If you haven’t been picked up by the Magnet already, smoke something on the off chance . 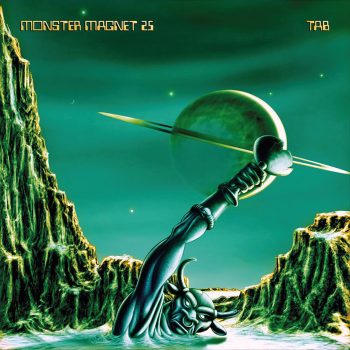 Spine Of The Gods