Mangled violins, cellos, and pianos, and a vocal that will haunt for eternity…

Another new discovery thanks to what seems to an inbox for all and sundry to dump all kinds of musical excretions into (for which I’m very grateful), thanks to the hordes of BM-worshippers that pollute YouTube with the obscurest of the obscure, researching this band – or whatever this entity can be called since the identity of any of its members has long been no more than speculation – has been interesting, to say the least. Since 2004, Portugal’s Mons Veneris have released demos, splits, compilations, EPs and even a full length album, all of which, under the banner of black metal, range from the fire and brimstone guitar, bass, drums and vocals type of material to the eerie and terrifying atmospheric stuff swathed in blood-curdling screams and disparate and disturbing sonic atrocities.

And now, to be added to that steaming stew of blackened bile is Sibilando com o Mestre Negro. Whatever this combo of music-mutilating maniacs have done before, this is by far weirder, stranger, more experimental, better produced, and infinitely more intriguing. Sounding like something from an Avant-garde string quartet, this is sonically about as far as you can get from black metal. And though that may be the case, it’s about as black metal as you can get.

Violin, cello, classical guitar, piano, and ghostly vocals manifest themselves in all kinds of mangled shapes and shades across eight of the ten untitled tracks that though ostensibly formless, are harrowing, harsh, and haunting. And with guitar, bass, drums and a black metal rasp returning for the remaining ruthless two, the album deals its fatal blow. This album is a head scratcher, but not for the reasons you may think. It doesn’t fit anywhere. And it’s just magnificent. And it’s impossible to say why. 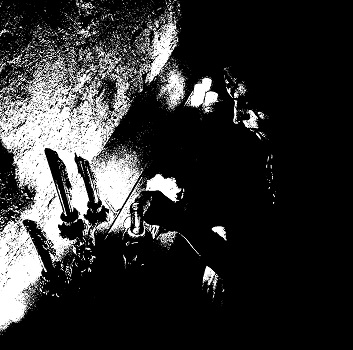