Yes, this is a bit of a low budget, back alley video, but that suits MNRVA’s aesthetic down to the ground. This debut EP by South Carolina stoner/doom trio (aren’t stoner/doom bands always trio’s? It’s the standard, God given configuration) is a raw, sludge laden fist in the solar plexus of a thing.

Formed in 2018 by guitarist Byron Hawk, bassist Kevin Jennings and drummer Gina Ercolin, they quickly set about gigging, writing and starting to record the EP. And what a rough-edged, rumbling thing of beauty (it is, after all, in the eye of the beholder) it is.

A psyche swirl of trippy guitar wafts into view before a filthy, fuzzed out bass kicks us into a dirty, lumbering doom riff…and we’re off. Big old grooves hove into view like, erm…titanic steamships appearing through a pea souper – although there is a definite Slayer-esque touch of precision to this roar too. The solo, when it arrives, is a wailing dervish and, after five punishing minutes, proceedings clatter to a raggedly pulsating finish. Nice.

‘No Solution’ grinds away with considerable menace and more than a dash of punk grit. Riffs veer off into other, increasingly gnarly riffs until a mammoth chug creates a hypnotic post rock mood. This is stoner but not as we know it.

All too soon a rumble of feedback leads us into the title track – and an appropriately spacey, echoey stormcloud of abused amps and guitar strings. It’s crunchingly scruffy riff slides and pummels before an almost melodic solo counterpoints its fury. The guitars lock in mercilessly before suddenly slowing down – tempo is a very loose, fluid construct in MNRVA’s world.

A final, scruffy, feedback-soaked finish and the job’s done. This is a fine EP, a thrilling, raw blast from a band you should definitely keep an eye on. The spit ‘n sawdust ‘n fury contained within the grooves of ‘Black Sky’ display a huge amount of promise. We await the onslaught of a full-length LP with keen anticipation. 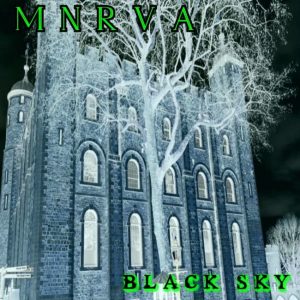