“Hey!” comes a fist-punching shout and you’re off riding down the highway, wind in your hair as a rumbling metal rocker has Miracle Master declaring they’re ready to conquer America and fight in the streets. Less a terrorist threat, more sticking it to the man in a political activism manner they add more perceived despots and institutions to their little black book with each consecutive verse bridged by a reflective melodic chorus. Either way, ‘Come Alive’ grabs your attention with a guitar solo that runs the length of a fretboard and hook line harmonies that fall in all the right places.

The pace slows a little for the hypnotic groove of ‘Tear Down the Walls’ then draws you in further to some dark ghetto where The Cult meet their Blue Oyster counterparts and girls shake their thing down on a hot sticky dance floor with ‘We All Touch Evil’. A wickedly crafted number.

Formed by former members of German hard rockers Pump, with a singer more famous for his appearances on the Danish edition of The X-Factor, Miracle Master offer a modern gritty sound derived in part from latterday Whitesnake and Thin Lizzy, a harder blues-edged Scorpions, and a trace of LA sleaze that’s wiped over with a European bikers’ beer mat: bass player Michael Vetter and drummer Andreas Minich keep their rhythm section loose classic ‘70s style, Marcel Bernhardt and Axel Reissmann on guitars grind and surprise (whichever’s the blond plays the solos in their videos) while Oliver Weers has one of those razor-soul and blues gravel gargled-in-honey-for-harmonies voices that would have you swear he’s the illegitimate grandson of some Newcastle beat group singer who played the bierkellers during the 60s.

‘Highway to Heaven’ is skuzzed party metal as if Zakk Wylde were putting in guitar fills, whereas ‘Miracle Masters’ itself starts off like Ozzy on ‘Iron Man’ before its science-fiction flavoured lyrics gallop forward in Iron Maiden style. For all such diversions, the band’s sound remains their own; one of rhythm, harmony and hooks dipped in sweat, booze and bike leather. Plenty of attitude but with arrogance handed over at the club’s front door. Raunchy, hard rocking and rich in songs not just riffs; there’s ain’t a duff track on this album. 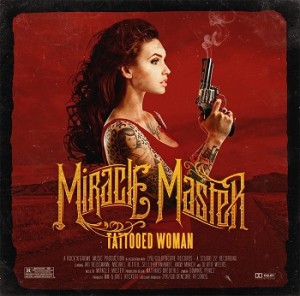