You’d have to be dead from the neck up not to be, if not bewildered, at least a little incensed by what’s going on stateside. Whether you see its new “leader” as a serious threat to world peace, to climate change, to fact-based science, to rational dialogue, to education, to women’s liberty and control of their bodies, to ethics, to morality, to responsibility, and/or to sanity itself, or as little more than a joke and an embarrassment to humanity and all that it has achieved in its relatively short time on this dying rock, I suspect you’re not as angry as one of the innovative founders of industrial music, the well-read and highly articulate Mr Al Jourgensen himself. And what could piss Al off enough to make him resurrect Ministry after laying it to rest after the passing of long-time collaborator and friend Mike Scaccia? The election of Donald Trump, of course.

Of the album, Jourgensen said “I’ve spoken my piece on the societal conditions that would elect such a blithering idiot. It’s not an anti-Trump album, it’s like a ‘did you pay attention in School? Does anybody have any intellectual curiosity anymore?’ album. It’s basically just holding up a mirror to ourselves and saying: ‘Look at this, is this what you really want to be?'” Like on Rio Grande Blood, The Last Sucker and a host of songs scattered through their back catalogue, quotes from the bloke in the white house are strewn across the album. With Trump’s “heroic” promise to make America great by building a wall (clever, huh?) to open the album, Jourgensen and his new line up do their utmost to tear it down.

Musically, it’s as hard and heavy as you’d expect, the drums, the guitars and the vocals solid slabs of industrial vehemence. Chucking in harmonica, bluesy guitar and some raging solos to bolster the barrage, the sound is huge and, gladly, all the better when played very loudly. While the three tracks that clock in at over 8 minutes – ‘Twilight Zone’, Victims of a Clown’ and closer ‘AmeriKKKa’ – plot a deliberately protracted pace with layer upon layer of heft woven into the densely weighted atmospherics, the 49-second collage of channel-hopping samples that make up ‘TV 5-4 Chan’ pretty much sum up Jourgensen’s image of America’s white trash “army” in the 21st century: frontal lobe-missing gun-wielding and jingoistic-slogan-spewing cannon fodder for the elite.

More direct in its attack, ‘We’re Tired Of It’ is barbed and burning while both ‘Wargasm’ featuring Fear Factory’s Burton C. Bell and ‘Antifa’ – both tracks victim to particularly naff videos – are venomous, the latter having prompted the predictable responses that the opponents of fascism usually receive (see Jourgensen’s comments on the Antifa movement in the playlist below). And with the mammoth pummelling of ‘Game Over’ and ‘AmeriKKKa’, the album is closed out in spectacularly scathing and searing style.

When Jourgensen’s got something to be pissed about – which is usually when the Republicans are in power – Ministry’s music is sharper, more incisive, striking the target with all the accuracy and effect of a good ‘ol MurriKKKan guided-missile. There may be a few misses on the album but there are more than enough hits. That Trump, in sample after sample, has a distinct presence on the album, oddly, detracts from the album’s intended impact. Why? Because those that voted for him won’t listen, nor will they question the inane ideology within which they (sub)exist. And so it’s those that agree with Jourgensen’s position that seem to suffer. But while intolerance, impatience and idiocy dominate, Jourgensen and co. will rage on.

Looks like Ministry will be around for a while then, huh? 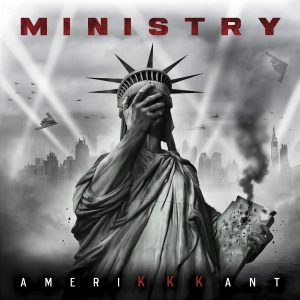