Since 2013, Industrial heavyweights 3TEETH have been gaining traction with their intense and dense electronic salvos. With their 2014 eponymous debut making waves and reaching number 8 on the iTunes electronic music chart, 2017’s <shutdown.exe> saw Sean Bevan of Nine Inch Nails and Marilyn Manson notoriety mixing the record and giving it the kind of heft that the songs demand. Arriving the day after this gig, album number three, Metawar – with Sean Bevan returning as producer – is set to make a suitably disturbing racket. And given their performance this evening, especially after this tour.

And while Mincolla is the consummate frontman, not once does he overshadow the band. Beneath a torrent of red, green, blue, purple and white lights and between clouds of dry ice, individually and collectively, the sheer presence of this band is enough to make you believe that we are watching tonight’s headliners. When we see 3TEETH next on these shores, they will be headlining. And I would wager that the stage production will be every bit as intense as their performance.

It’s Independence Day in ‘Murica so what better way to slay – sorry, celebrate it than with industrial legends Ministry? When Uncle Al and co.’s latest album AmeriKKKant (reviewed here) was released last March, a UK tour was welcomed by one and all. Seeing them in Nottingham in July with two mammoth-sized, flickly-slicked orange-haired chickens in Nazi armbands flanking the stage, Al and his noisemakers were burning as brightly and fiercely as the wrath and contempt in which they hold the dog-shit haired one. But one year later and Al is back, pissed as ever and just as determined to hammer home his anti-ignorance, anti-bigotry, anti-stupidity message. And we are very glad to see him.

Part one of the evening is the AmeriKKKant album in full with ‘I Know Words’ opening proceedings before the barbwire dreadlocked, battle tattooed, face-pierced Al enters the stage armed to the teeth with a blues harmonica to join his already loaded band – featuring original Tool bassist Paul D’Amour, no less – and hammers into ‘Twilight Zone’ and ‘Victims of a Clown’, this latter track featuring a guest – or should that be ghost? – appearance by Charlie Chaplin making his famous speech from The Great Dictator. Then from the memetic depiction of America’s 21st century, frontal lobe-missing, gun-wielding, jingoistic-slogan-spewing white trash cannon fodder for the elite of ‘TV5/4Chan’, through ‘Wargasm’ (with Burton C. Bell’s clownface filling the screen), ‘Antifa’ and ‘Game Over’ into ‘AmeriKKKa’ – introduced by Al’s brief but potent warning, “We don’t want you on the same path to destruction as us. Fuck Nigel Farage” – the political part of the evening comes to a blazing close.

A short break and then comes part two: “We’ll celebrate the 4th July by playing some old tunes from when days were crappy but not shitty.” For part two of the evening, the apocalyptic imagery that flashed on screen above the band as they thrashed out rabid riffs and pulverising beats against a background of soundbites that punctuated Al’s invective is intensified by the inclusion of William Burroughs, drugs, motorbikes, NASCAR, gigantic eyes, riots and protest and all-out violence.

With the relentless ‘The Missing’ and devastating ‘Deity’ to punch the evening in the face, next comes ‘Stigmata’. Written at the last minute when Jourgensen needed another song for 1988’s The Land of Rape and Honey, in his 2013 autobiography, Ministry: The Lost Gospels…, Jourgensen states how he hates it for being too simplistic and for being played with sampled guitars and a pitch shifter, it’s a track that has deservedly become a favourite and it’s incredible to see how the audience react to it this evening, headbanging and crowd-surfing going through the roof. As if the evening couldn’t get any better, we get the triple threat of ‘Jesus Built My Hotrod’, ‘Just One Fix’, and ‘N.W.O.’ from 1992’s Psalm 69: The Way to Succeed and the Way to Suck Eggs followed by ‘Thieves’ and a Revolting Cocks track – ‘No Devotion’ – to close. Drugs, religion, politics and hymns to the power of protest, Ministry nailed it. With but a year between appearances on these shores, if Uncle Al fancies coming back this time next year, he’ll be very welcome. Either way, we’ll be waiting. 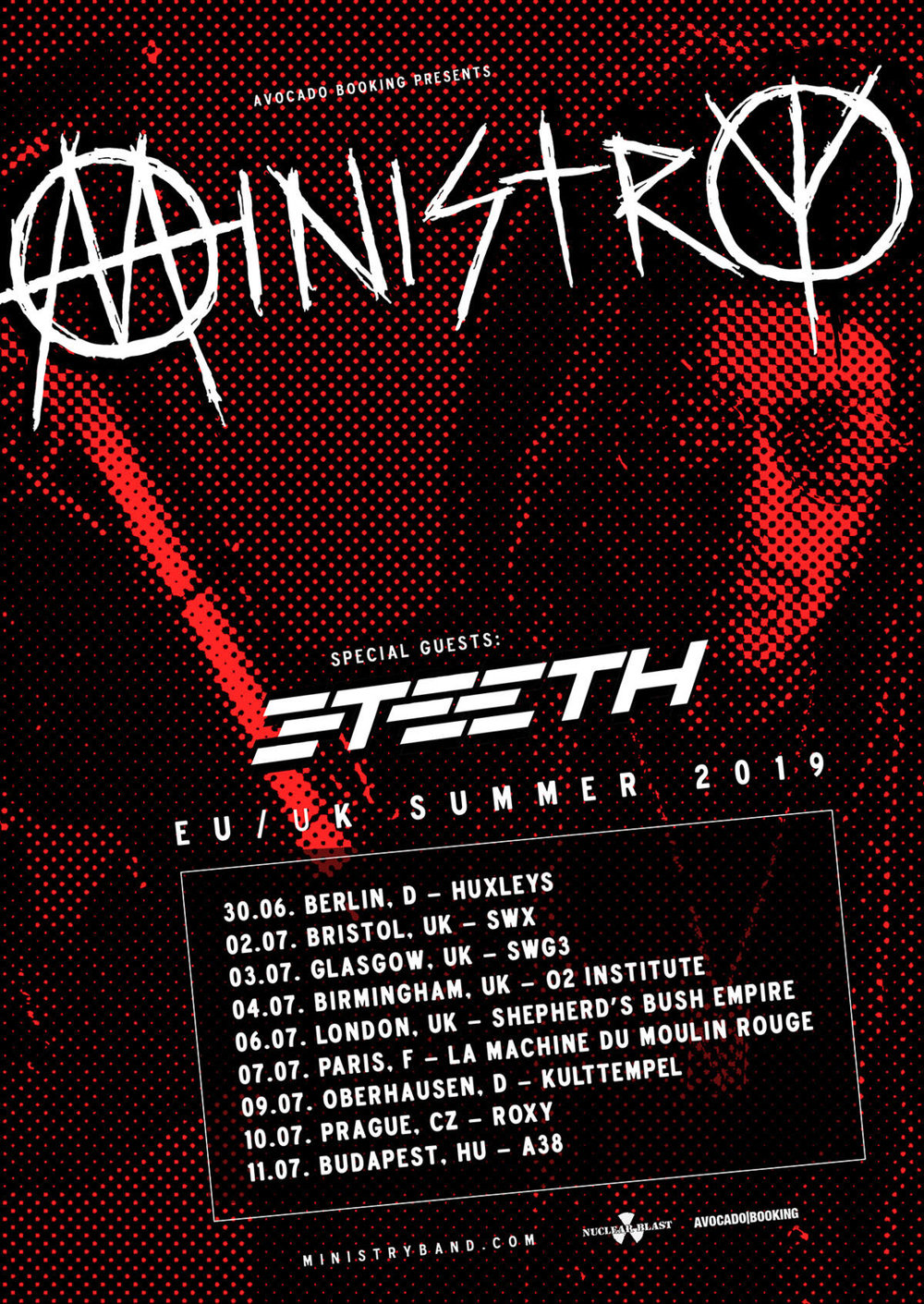