Having released 2011’s Temple Of Rock with a plethora of guest stars, the problem then came in which band to take on the road. It turned out that Michael toured each continent with a slightly different band. In Europe he settled down with Doogie White on vocals, with the old Scorpions’ rhythm section of Francis Buchholz and Herman Rarebell and long serving sideman Wayne Findlay on keys & guitar. Having witnessed this live unit in action a couple of times it was clear that something good was happening. Schenker was clearly making his way back up the ladder, playing larger venues, and culminating in a successful headline slot at the Steelhouse Festival in the summer. An album by this line up then promised much.

A short intro gives way to ‘Where The Wild Winds Blow’; a slow burning track with vocals that immediately grab you from Doogie White, and a small flourish of Spanish guitar preceding a typical Schenker solo. Anyone catching Michael during the summer will already be familiar with ‘Horizons’ which he debuted at the shows. An absolute monster of a track that pounds along thanks to the Rarebell/Buchholz rhythm section and heavy riff. The second half of the solo has a melody that wouldn’t be out of place on Schenker’s first couple of albums. Magnificent stuff.

Doogie White’s often dark and fantasy tinged lyrics help to give the album a cohesiveness. From the Celtic vibe of ‘Lord Of The Lost And Lonely’ through to the ‘Land Of Thunder’ there is little let up. The songs come fast, heavy and yet always with the melody that is so central to Schenker’s music. ‘Bridges We Have Burned’ is another heavy brooding piece that I can see flourishing further in a live setting.

‘Because You Lied’ stands out as it is completely different to the rest of the album. A pulsing beat with vocals drenched in echo give an almost Budgie type quality to the track. ‘Dance For The Piper’ finished the album on a high. What was promised on 2011’s Temple Of Rock, has been delivered in spades on Bridge The Gap. A strong album from a strong line up, and one that I’d hope that Schenker keeps intact for a few years. Listen loud and listen often. 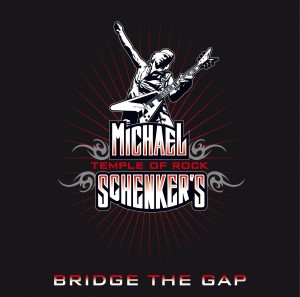