If you want original music, go listen to something that nobody buys. The truth is: people crave familiarity, and genuinely talented artists just keep coming up with the goods. Even when mining a narrow seam, Michael Monroe brings nugget after nugget back to the surface.
It’s more than 25 years since the demise of Monroe’s flamboyant hard rock band, The Hanoi Rocks, but you can still hear that sound, mixed in with the simple elegance of the lower east side’s proto punk bravado and the raw, (double) garage rock kick from whence it all began.
So yes, it’s a stratified sound, a carelessly layered, organic, overlapping sound, where everything bleeds into everything else, a product of the band’s rich bloodline – Sami Yaffa and Steve Conte, both ex New York Dolls, Karl Rosqvist, ex Danzig, and Rich Jones, ex Black Haloes, and of course, Monroe himself, a kissin’ cousin of almost all of these bands.

As if sensing that the thought of 13 tracks might put off the impatient listener, the album launches at full pelt with thin walled garage rock opener, ‘This Ain’t No Love Song’, then hits the brakes for ‘Old King’s Road’, Glam rock’s answer to ‘Auld Lang Syne’, slowing further as it collides with ‘Going Down With The Ship’, a bandana rock ode-to-end-times, a song with a real air of finality and a chorus lifted from a well-thumbed copy of the Backyard Babies’ songbook.
You’ll experience a strong sense of familiarity with Blackout States, even though it’s all freshly minted.
And as ever, at the heart of Monroe’s music – in solo or in band form – is the sound of the street. It illuminates the music here like a beacon of light, full of emotive conviction and unvarnished truths and confessions. The drug fueled crash and burn of ‘Good Old Bad Days’ and the inevitable sense of loss it creates; the reflective philosophy of ‘Permanent Youth’; and a moving paean to the past, ‘Dead Hearts On Denmark Street’, a powerful song that regrets the passing of Tin Pan Alley, the hundred-meter stretch of music stores, studios, venues and more that orbited London on the outer edge of Soho. So yes, there’s a strong bittersweet undertow surging through this album, yet it never overwhelms the lightness of songs like ‘Keep Your Eye on You’ and the title track, ‘Blackout States’, both full of sinewy, Tom Petty like melodies and Beatlish guitar jangle, highlighting Steve Conte’s velvet touch and surefooted axe work.
It’s clear that Monroe is an artist who both recognizes the passage of time and accepts the elusive nature of success. But he, and his band, have never taken their eye off the prize, and on this recording they come out swinging. Older, wiser but still full of hell. 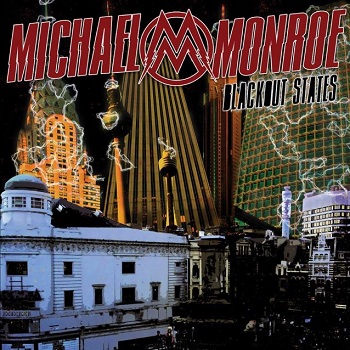