Bolt Thrower are one of the MIdlands’ best loved and longest established metal outfits. But when founder member, drummer  Martin ‘Kiddie’ Kearns departed from this world last year at the unseemly early age of 38 the remaining members felt there was nowhere left to go and duly called time on their musical activities.

And so it appeared that the story ended there. That was until Bolt Thrower singer Karl Willets started rocking up with his old pal Frank Healy from another name forever sealed into the annals of Birmingham’s metal legacy in Benediction. The jam sessions started out almost as a form of therapy to allow both men to reflect on Kiddie’s sad passing through the kind of music that all three of them have lived and breathed throughout their entire lives.

What started as a plan to hang out, have a beer and bash out a few old covers quickly escalated into something much more earnest and so it came to be that around a year after Kiddie’s death, Memoriam – as they quite aptly decided to call themselves – were created. Completing the four-man line-up are Andy Whale (ex-Bolt Thrower) and Scott Fairfax (Benediction).

Any thoughts of quietly slipping under the radar were blown straight out of the water with a debut performance at no less a stage than Bloodstock last August, since when the Memoriam’s momentum has accelerated at a staggering rate of knots.

An initial 3,000 pressing of a debut EP on no less a label than the mighty German emporium Nuclear Blast completely sold out while 2017 has so far seen them secure more overseas invites than the Foreign Secretary. Anyone planning a summer excursion could well encounter Memoriam at anything from Blastfest to Graspop to Summerbreeze. 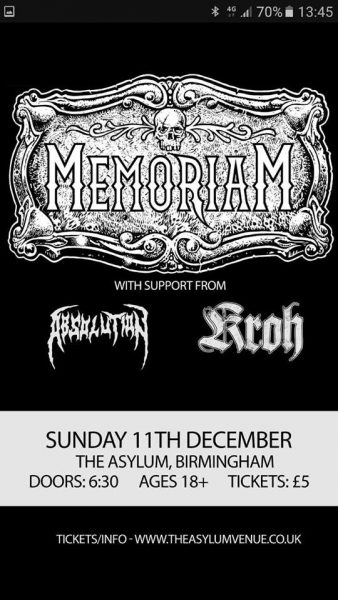 But before the sun lotion and Bermuda shorts are rooted out from the bottom of the wardrobe a large crowd, peppered with numerous friends and family members, gathered at the Asylum in Birmingham to see how things were progressing on what was a bracing December night.

Buoyed by the feelgood pre-Christmas buzz, Memoriam took to the large Asylum stage (downstairs, rather than the smaller top tier venue) and proceeded to unleash what was little short of a death metal masterclass. Willets is an impressive frontman, leading Memoriam through a number of tracks from their forthcoming full length debut For The Fallen (released via Nuclear Blast on March 24).

While full of great riffage and pounding skins, the face-melting familiarity of ‘Drone Strike’, from their debut EP, was naturally received with particular enthusiasm. While generally maintaining an even tempo that gave their set a real buzzed up vibe, from time to time Memoriam carved out a caustic curtain of aural annihilation. But while naturally drawing from the roots of both Benediction and Bolt Thrower, Memoriam are clearly intent on shaping things their own way.

The best tribute you can offer Memoriam is to say that Kiddie would have wholeheartedly approved and from the pits of darkness the newly formed Brummie outfit look destined for a bright future. The evening at the Asylum was a terrific night for the Midlands extreme metal scene in general, the first hand grenade pins being pulled by local aggressors Absolution. If there’s a psycho killer in the world that this lot haven’t penned a song about then he’s clearly not doing it right.

The Absolution setlist is little short of a who’s who of depraved deviants ranging from John Christie (subject of recent BBC drama Rillington Place), sick child killers Brady and Hyndley on ‘Shallow Graves’ through to their personal favourite fiend ‘Dr Death’ Harold Shipman, who infamously spent most of his time as the local GP in a Greater Manchester surgery trying to finish his patients off rather than improve their wellbeing.

Absolution’s death metal tirade is so old school it’s almost in black and white and in the healthily bearded Neil Haddon they possess a frontman who stomps across the stage with commanding conviction. He’s also a professor of the damned, thoughtfully sharing his knowledge and wisdom on a succession of bestial badguys. Musically, Absolution are not so much as infectious as infected, spreading their warped words with stomach churning command.

With unfettered aggression top and tailing the evening even the most death metal diehard was probably crying out for something a little different. Well the rose between the two spiky thorns was provided by rising doom stars Kroh, back on home soil just a few days after impressing a large crowd at Damnation Festival in Leeds.

Kroh possess just the right balance of haunting shimmering riffs alongside more clinical and confrontational kicks. Debut album Altars featured in plenty of end of year polls and so for local followers there are now plenty of instantly recognisable numbers within the set. On ‘Break The Bread’ Kroh slip into a bleak and hostile soundscape with singer Oliwia Sobieszek collapsing into siren like wails at its most visceral moments.

On a track such as the shimmering ‘Living Water,’ Kroh’s ability to command an audience shines through as they paint a compellingly atmospheric picture which draws you in. On the softer songs Oliwia almost lures the audience into a transcendental state but their’s a real sharp edge to their gothic grooves when unleashed fully such as on the riveting gem ‘Feed The Brain’.

Memoriam, Kroh and Absolution all look set fair for a fulfilling 2017. 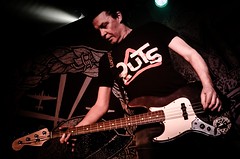 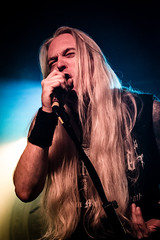 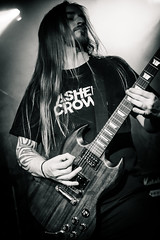 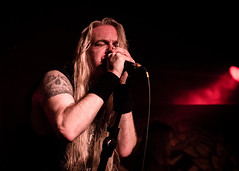 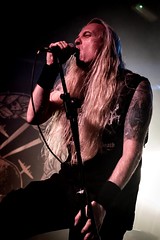 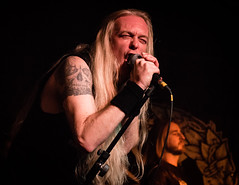 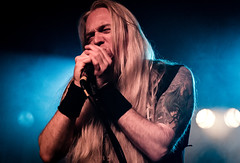 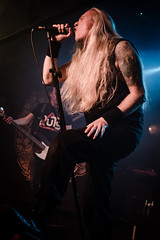 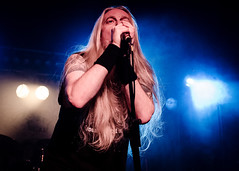 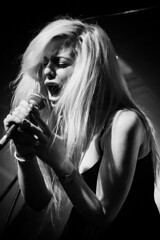 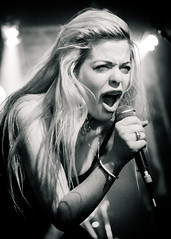 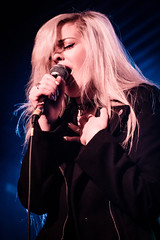 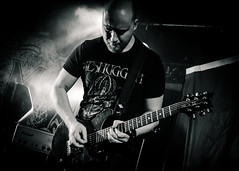 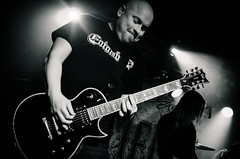 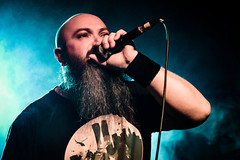 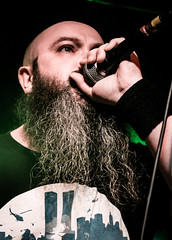 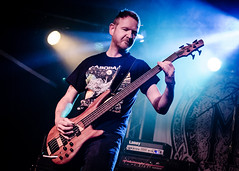 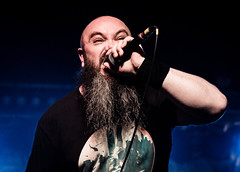 Absolution 1 (FILEminimizer)
Check out all the upcoming shows at...
Our latest gig photos on Flickr