Paul Castles gets caught in the crossfire of Memoriam’s debut album, For The Fallen, released via Nuclear Blast Records on March 24, 2017

A debut album released via arguably the biggest underground metal label in Europe, a string of appearances on the horizon at some of Europe’s biggest outdoor festivals and hanging out with your lifelong pals. What’s not to like! Of course, as their very name suggests Memoriam is a band created in times of darkness through which they are slowly but surely now starting to emerge blinking in the light.

Memoriam feature members of two of the Midlands’ most revered underground acts in Bolt Thrower and Benediction, lifelong compadres brought together through a union of minds following one painful punctuation point in all their lives, the death at just 38 of age of Bolt Thrower drummer Martin ‘Kiddie’ Kearns in September 2015. Kiddie was not merely the sticksman with Bolt Thrower he was their founding member and inspiration and driving force. He left behind a band bereft with grief, not even able to look at an instrument let alone countenance continuing with Bolt Thrower with their much missed brother no longer in step with them.

A few weeks later Benediction too felt the hand of death on their shoulder with the sad passing of bassist Frank Healy’s father. Silencing two of the UK’s longest reigning death metal bands is no easy ask, although for once both camps fell into a reflective and painful silence. As time evolved Healy and Bolt Thrower singer Karl Willets met up over a few pints, the two still mournful pals agreeing to vent a little of their grief through a few jam session. The picture took on more clarity when ex-Bolt Thrower drummer Andy Whale and riff-master Scott Fairfax fell into line. Playing a few old covers and feeling that surge of energy pulsing through their bloodstream proved to be more cathartic than any counselling session.

Within days Memoriam began to take on a shape and definition all of their own, bringing together the best of Benediction and Bolt Thrower. Remarkably the new outfit made their live bow at Bloodstock 2016 and such was the reception they received that it became clear to all that Memoriam had a serious future with much more to offer than a cover band.

A demo EP, sold out in days, at which point Nuclear Blast decided Memoriam, newcomers and yet veterans at the same time, were worth getting onside. For The Fallen is the first product of that happy union and what a bloodcurdling full length debut it is. The opening band name track is a superb lead in, a sustained menacing chug coupled with a dangerous scissored flick, Willets then adding his hoarse roar to it. Neville Chamberlain’s historic wireless declaration to the nation ‘we’re now at war with Germany’ lead into a fist-pumping chant of ‘War!’ and then ‘War Rages On’ ignites like a handgrenade, a firestorm of a track that features one of Memoriam’s mountainous breakdowns as Willets hollers: “And now you stand, Last remnants of man. This cannot be undone, the war now rages on.”

Although death metal down to the bone, Memoriam have a style of their own, and don’t feel the need to race through each track as though their life depends on it. In fact it’s more often than not the opposite. The serrated edge savagery is here alright but Memoriam package it in such a way that it slowly descends upon you, rather than sending you to the canvas with a single knockout punch.

On tracks such ‘Reduced To Zero’ the fuzzed up riffage is given time to develop and gradually assert its commanding authority, a threatening drum roll from Whale keeping things nice and tight allowing Willets the space to move in with his  tough as tungsten tones. This is a tank of a song, medium paced and yet completely crushing with anything within range likely to get the pancake treatment.

Speedier numbers such as ‘Corrupted System’ almost catch you unawares as it races away like a getaway car on a bank job. ‘Flatline’ though is an immense number, deeper than a mine shaft and almost as dark. A crunching opening section parts like the Sea of Galilee to allow a corrosive chug to take centre stage with a few lightning riff strikes piling another layer on to an already scorched soundscape. At seven minutes in length this punishing song has room to manoeuvre eventually spreading its wings as a riveting riff battle is fought out between Healy and Fairfax, each circuit more compelling than the last.

At around nine minutes, album closer ‘Last Words’ is another sustained attack with Willets spelling out its message from the very start – “To those I hold dear, If I do not return, Remember with pride, this life we have shared.”  The emotion is tangible and this is a monumental final number. There’s real depth to Memoriam’s songwriting. But while Willets, Healy and Whale can trace their roots back to the very early days of death metal it is in fact the younger Fairfax who has written much of the actual music. This gives the band a healthy symmetry between old and new death metal with the bassist able to filter in some more tech sections that enable Memoriam to step out of both Bolt Thrower’s and Benediction’s shadow.

The Brummie quartet are in demand in the summer having been booked to play at festivals across Europe. Having witnessed their stormin stage show at The Asylum in Birmingham back in December (reviewed here) I can vouch for their quality live too. ‘A celebration of life through death metal’ is the Memoriam mantra and For The Fallen is just that. They can march forward with confidence and if they care to look back over their shoulder they’ll find a growing battalion of supporters in step with them. 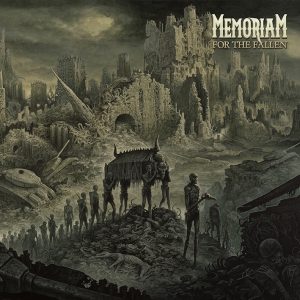