It takes a while to acclimatise, even if you’re a fan, but you’ve got to admit that Planet Melvins is never a dull place. And even by their own high standards, ‘Pinkus Abortion Technician’, the hundred and twenty seventh (I may be exaggerating) studio album from Melvins is a fascinating, curious addition to their oeuvre.

Buzz Osborne and co. are seemingly totally unwilling to even contemplate resting on their laurels of late. Even for a band who experiment constantly they appear to be stretching and testing themselves more than ever. This new release is a spiritual cousin of 2016’s brilliant ‘Basses Loaded’ which employed six (count them) bassists. This time we only have two but we have them playing simultaneously – current Melvins bass player Steve McDonald and part-time Melvin and full-time Butthole Surfer Jeff Pinkus (which explains part of the album title).

As founder member Dale Crover explained, “It’s an experiment in the low end of the aural spectrum”, and they have every intention of continuinf the experiment when they head out on tour. Low enders take note, two pronged bass attack!

The album itself is business as usual, which, when dealing with the Melvins, means you’ll have absolutely no idea quite what to expect next. To illustrate this point they kick the album off with ‘Stop Moving To Florida’ (see above) – a mash up of ‘Stop’ by The James Gang and, you’ve guessed it, ‘Moving To Florida’ by The Butthole Surfers…no, seriously, it is! And it works. The James Gang half of the song is effortless classic rock, Osborne layering his chunky guitars beautifully and peeling off a killer solo. And, just as you’re getting comfortable, it collapses in a gibbering heap, the basses take centre stage and we weave drunkenly into four minutes of Butthole weirdness (so to speak). It’s all supremely odd and very, very Melvins.

And that’s just for starters. We also have short blasts of ‘don’t spare the horses’ punk thrash and more, oh much more, questing oddness. ‘Don’t Forget To Breathe’ stretches out to 8 minutes of lethargic, ominous bass led rumblings (with added gong). Indeed, the bassists are used to the fullest – the angular wibbliness of ‘Prenup Butter’ is challenging, fascinating and oddly tuneful.

There are definite highlights. A cover of The Beatles ‘I Wanna Hold Your Hand’ should be mere throwaway filler…if it weren’t so damn good. Taken at Sabbath pace and heaviosity, it’s a thrilling rampage of noise terrorism, ending with a wall of screaming feedback.

‘Flamboyant Duck’ is a wonder. Acoustic guitar and banjo intertwine lithely to form an oasis of calm amidst the…Melvinness of it all until a fuzzed out guitar arrives for a gloriously noisy finale. The album ends with a second Butthole Surfers cover – ‘Graveyard’ from ‘Locust Abortion Technician’ (which explains the other part of the album title). It’s the Melvins covering The Buttholes…you can, if you’re unhinged enough, imagine how this sounds. But it works, even (or especially) when it descends into a massive noise whiteout that even Sonic Youth would be proud of.

It’s the Melvins happily doing whatever the fuck they want. Which is exactly as it should be, and which of course, is what makes for a great Melvins album. All hail the weird. 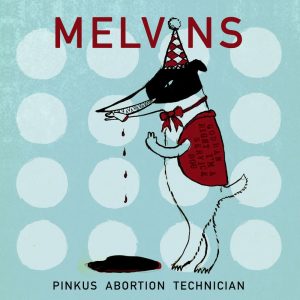