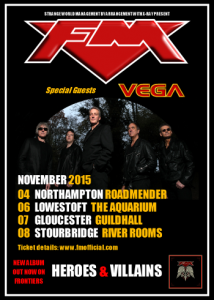 UK legends FM have announced four live dates this November ahead of their European tour. Three of the four are in the Midlands, Gloucester Guildhall, Northampton Roadmender and a return to The River Rooms in Stourbridge on the 8th November. They will be taking the rather awesome VEGA on the road with them as support at all these shows! Well that’s made my autumn!

I’m quickly becoming a huge fan of Birmingham based melodic rockers RKB who have really grabbed my attention with their demo and live footage. It’s great to see a melodic rock band out there working the live circuit and I really hope their hard work gets rewarded sooner rather than later. Whilst I anxiously await and album or EP from this female fronted melodic rock act check out this live footage of the track ‘Holding On’ filmed at The Flapper in Birmingham.

Jack Frost’s Seven Witches announce the release of their new album The Way Of The Wicked. It will feature the tracks ‘Among Us’, ‘Soul Searching’, ‘When I Flew’ and ‘Angel of Salvation’. You can check out the video for the lead track from the album ‘Better Days’ below.

A name to check out next year is Phil Rocker who has an album Hard To Bleed set for release on January 29th. It features a multitude of well known rockers as special guest musicians including Doug Aldrich, Brian Tichy and Tim ‘Ripper’ Owens. Tracks set for inclusion are ‘So Close To Hell’, ‘Burning In The Fire’, ‘Drifting Away’ and ‘So Unreal’. You can check out the lyric video for ballad ‘How Does It Feel’ below.

Rumours are abound that Treat may reform and hit the studio again. When Treat called it quits it was really disappointing news for many melodic rock fans especially as their latest efforts were so well received. The rumours have been triggered by an in studio photo on Treat’s social media with the tag line ‘testing the waters with producer Peter Manssson’.

The Winery Dogs will release their hotly anticipated second album Hot Streak in October. Here’s hoping this one is as good as the debut and they have plans to get their asses back on the road in the UK again! It will include the following songs, ‘Oblivion’, ‘Captain Love’, ‘Fire’ and ‘War Machine’.

Prolific Chicago pop rockers 7th Heaven have just released a brand new CD called Next which can be picked up directly from the bands website and feature new singer Adam Heisler and established fans should love it. They have also announced the release of a dual CD best of featuring forty two tracks entitled The Best Of 1985-2015.

Praying Mantis have a released another official audio video for the track ‘Tokyo’ lifted from their latest album Legacy which is out right now on Frontiers Records.

Another brand new video from former Queensryche front man Geoff Tate’s new band Operation Mindcrime, check out ‘Burn’ below. It’s taken from the debut album The Key which is release on September 18th through Frontiers Records.

And here’s a lyric video for the track ‘The Stranger’.

And an official audio video for ‘Hearing Voices’.

A new super group called Cats in Space will release their debut album Too Many Gods through Harmony Factory/Cargo Records on October 2nd. You can check out their first official video for the track ‘Mr Heartache’ below. The album will also feature the tracks ‘Stop’, ‘Unfinished Sympathy’, ‘Only In Vegas’ and ‘Man In The Moon’.

Hanoi Rocks legend Michael Monroe has announced the details of his new solo album Blackout Dates. It’s out in October on Spinefarm Records and will feature the following tracks ‘This Ain’t No Love Song’, ‘The Bastard’s Bash’, ‘Permanent Youth’ and ‘Dead Hearts on Denmark Street’.

Mike Tramp has released a brand new video to promote his album Nomad which is out right now, check out ‘Give It All You Got’ here.

Escape Music will release the Lifeline album Scream in October. The band features Nigel Bailey and Lee Small who share vocal duties and Paul Hume of Lawless provide the guitars. It will feature the track ‘Fear No More’, ‘Feels Like Love’, ‘Now His Angels Gone’ and ‘Mary Jane’.

The Murder of My Sweet have released the official video ‘The Awakening’ taken from their brand new album Beth Out Of Hell enjoy it below.

Joel Hoekstra’s 13 have release a new lyric video ahead of the debut album Dying To Live. Check out ‘Anymore’ which features Russell Allen on vocals here.

Guitarist Magnus Karlsson’s solo band Freefall will release their second album Kingdom Of Rock through Frontiers Records in November. The album features a host of guest vocalists including Harry Hess, Tony Harnell, Jorn Lande, Jakob Samuel, Joe Lynn Turner, Tony Martin and David Readman. Tracks set for inclusion are ‘Out Of The Dark’, ‘Angel of the Night’, ‘Never Look Away’ and ‘A Heart So Cold’.

Rock legends Kansas have signed a new recording deal with Inside Out Music. I’m sure the news of new music from Kansas will please many fans of this iconic band.

Vanden Plas will release their new album Chronicles of the Immortals – Netherworld II through Frontiers Records in November. This follow up to last year’s Netherworld I opus will feature the tracks ‘In My Universe’, ‘Stone Roses Edge’, ‘Blood Of Eden’ and ‘Monster’.

Voodoo Hill who features Glenn Hughes on vocals have released another official audio video for the track ‘All That Remains’. The album Waterfall will be released in mid-October on Frontiers Records.

And here’s a lyric video for the title track ‘Waterfall’.

Stryper have released another official audio video for the track ‘Big Screen Lies’ lifted from their album Fallen which is out right now.

The V has released a video for the song ‘Again’ taken from the album Now Or Never. Check it out here.

UK guitarist Vince O’Regan and American vocalist Phil Vincent close the book on Legion with their eighth and final album Solace which will be released on September 21st via Z Records. As previously reported it will feature Eric Ragno on Keyboards and will include the tracks ‘Torn To Piece’s’, ‘Living For The Moment’, ‘Hold Me’ and ‘Gone Forever’.

Argentina’s Watchmen will release their long awaited second album Nowhere To Hide on September 21st via Z Records. It will include the tracks ‘One’, ‘Adrenaline’, ‘Lonely Rider’ and ‘I’ll Be Alright’.

Cult Brummie AOR-ster’s Push UK have released a video for the track ‘Voices Calling’ it’s taken from the bands recently released album Past Into The Future which is out right now on AOR Boulevard Records.

I stumbled across this rough demo on Facebook by Leon Winteringham and thought it would intrigue AOR fans so check out ‘Unkbreak My Heart’ below.

Spanish female fronted melodic rockers Xtasy have released a new video for the ballad ‘It’s You’. It’s taken from their debut album which is out right now, I’m a big fan of these guys so enjoy!

MelodicRock Records will release the debut album from Serpentine Sky in late October. These Aussie’s have only taken twenty five years to get round to releasing this there self titled debut album, here’s hoping it’s worth the wait!

Melodic rock fans should enjoy this video from Finland’s State Of Emergency for the track ‘Feel The Rain’. Enjoy!

Queensryche have released their brand new official video for ‘Guardian’ rock out to it below. It’s taken from their Condition Human album.

Frontiers Records have signed hot newcomers Shiraz Lane from Finland. They will release their debut album in the spring of 2016. Check out the video below for a track from their recent EP for a taste of what to expect next year!

New super group CWF will release their self titled album through AOR Heaven in October. The band features vocalists Bill Champlin, Joeseph Williams and guitarist Peter Friestedt so will is set to be of keen interest to fans of pure AOR. It will feature the tracks ‘Still Around’, ‘Nightfly’, ‘Hearts At War’ and ‘River of Fear’.

Billy Sherwood will release the concept album Citizen in November on Frontiers Records. The album features the cream of the current Prog Rock scene and will feature the following tracks ‘Man and the Machine’, ‘No Man’s Land’, ‘Trail of Tears’ and ‘Escape Velocity’.

AOR Heaven will release the debut album from Radio Exile in October which features vocalist Chandler Mogel (Outloud/Talon). The album will feature the following songs ‘Soulfire’, ‘Feels Like Home’, ‘Starting Over’ and ‘Down In A Hole’.

I stumbled across this video from Violet Janine which also features Pontis Snibb. Cracking track and great for lovers of female vocalist’s! Check out ‘Down On My Knees’ here. One to keep an eye on!

Here’s another brand new video from Bryan Adams here for you from his new album. Check out ‘Brand New Day’ below.

Michael Monroe has released a video for the track ‘Old King Road’ ahead of his new album Blackout States which is unleashed in October.

Blackmore’s Night have released another single and video from their latest opus All Our Yesterday’s. Check out ‘Will O’ The Wisp’ below.