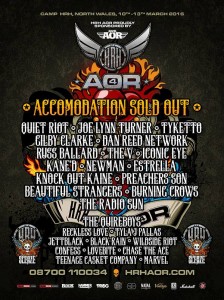 HRH AOR 4 – have announced another batch of bands to join the line-up for next March’s Festival. On the AOR stage we have The V (featuring Veronica Freeman of Benedictum fame), Iconic Eye, Kane’d, Newman, Estrella, Knock Out Kaine, Preachers Son, Beautiful Strangers, Burning Crows and The Radio Sun. The Sleaze stage gets the following additions, Tyla & The Dogs, Jettblack, Blackrain, Wildside Riot, Confess, Lovebite, Chase The Ace and Teenage Casket Company. Accommodation has sold out but tickets are still available from www.hrhaor.com and 08700 110034.

Legendary Black Country vocalist Glenn Hughes returns to the UK for a tour in October this will include a home area show at The Robin in Bilston on October 26th. He’ll be performing songs from all across his career from Deep Purple to Black Country Communion and everything in between including plenty of solo material. He’ll be joined by guitarist Doug Aldrich, so that make this show of even more interest for all us melodic rockers!

Guitarist Gilby Clarke is bringing his rock n roll show to the midlands in December when he plays the Robin in Wolverhampton on December 14th! Looks like a busy December at The Robin for me alongside shows from Nazareth and Tygers of Pan Tang! If you didn’t already know Gilby Clarke will also be playing HRH AOR 4 next March!

The Murder of My Sweet returns with a new concept album Beth Out Of Hell. It’s scheduled for release on Frontiers Records in August. I’m a big fan of these guys and very much looking forward to cranking this one up! Tracks to be included are ‘Bitter Love’, ‘Still’, ‘Heaven Succumb’ and ‘Means To An End’. You can check out the first lyric video to support the album for the song ‘The Humble Servant’ below, crank it up!

Here’s an interesting announcement former Night Ranger and current Whitesnake guitar slinger Joel Hoekstra has a solo album coming under the moniker 13. It’ll include vocals from Jeff Scott Soto and Russell Allen. It’s set to be released in October on Frontiers Records. More details to be released soon.

Legendary vocalist Graham Bonnett has released a two track EP My Kingdom Come. You can check out these tunes produced by Alessandro Del Vecchio on the reverbnation page.

Chaos Magic have released another audio video to promote their debut album which is out this month, check out ‘One Drop Of Blood’ below.

and another for ‘A Little Too Late’

A new UK melodic rock band for you to keep an eye out for is Blood Red Saints who have recently signed to Frontiers Records. The band features vocalist Pete Godfrey who recently came to our attention with In Faith he’s joined by fellow In Faith drummer Pete Newdeck, ex Angels Or Kings guitarist Rob Naylor and bassist Lee Revill. Vega’s Tom and James Martin have co-wrote two songs that will appear on the debut album, so that’s piqued my interest!

Newman, No Hot Ashes, Lifeline and Blood Red Saints have been added to the Just Say Yes Charity festival taking place at The Spot in Derby next January. More bands to be added shortly and tickets are on sale now!

Dimino has released an official audio video for the track ‘Sweet Sensation’ check it out below. It’s taken from the recently released album Old Habits Die Hard on Frontiers Records.

Following an official statement from In Faith guitarist Tony Marshall has officially disbanded the group. Which I’m sure is news that will disappoint most people following the rather cracking debut There’s A Storm Coming. In Faith vocalist Pete Godfrey and drummer Pete Newdeck are currently promoting their new band Blood Red Saints.

Exciting modern melodic rockers Degreed have just released a video for the track ‘The Scam’. It’s lifted from their latest opus Dead But Not Forgotten which is out now on Sun Hill productions. Check the video out below!

Not exactly melodic rock but I think most genre fans have a soft spot for ultra melodic NWOBHM flag bearers Iron Maiden who return with their new album The Book Of Souls in September. Given the long running time of the album the 11 tracks have been split over two discs, this highly anticipated album comes five years after their last album The Final Frontier. Obviously given lead singer Bruce Dickinson’s recent battle with cancer they have delayed any live tour plans until early in 2016. The album will include the following tracks ‘Speed Of Light’, ‘When The River Runs Deep’, ‘Death Or Glory’ and ‘Tears Of A Clown’.

Kelly Keeling has released another official audio video for the song ‘Take Me To The Limit’ listen to it below. It’s lifted from Keeling’s latest solo album Mind Radio which was released this month.

and here’s another for the track ‘Isolated Man’

NWOBHM legends Praying Mantis will release their tenth studio album Legacy in August via Frontiers Records. It will feature the tracks ‘The One’, ‘Better Man’, ‘All I See’ and ‘Fallen Angel’. Check out their first video from the album for ‘Fight For Your Honour’ below.

Cult melodic metallers Royal Hunt return with a new album Devil’s Dozen in August on Frontiers Records. It will feature the following tracks ‘Heart On A Platter’, ‘A Tear In The Rain’, ‘Until The Day’ and ‘Way Too Late’.

With Phil Vincent’s recent announcement that he has left Legion I had presumed that would see the end of the band. But it has just been announced ever busy American keyboardist Eric Ragno has been drafted in to add key’s to the final Legion album. I presume Vincent’s vocal parts were recorded prior to his departure. More information and when I get it!

Veronica Freeman’s new hard rock band The V has released another official audio video for the track ‘Line In The Sand’. Their debut album Now Or Never is out now on Frontiers Records.

and another for ‘Starshine’

Swedish AORster’s Miss Behaviour are hard at work on their new album and have signed with new management company Sun Hill Productions.

Nelson has released a new official video for the track ‘Back In The Day’. It’s lifted from their latest album Peace Out which is out right now on Frontiers Records!

Rock Candy have announced they will be re-releasing the Mr.Mister albums Welcome To The Real World  (which includes massive hits ‘Broken Wings’ and ‘Kyrie’) and Go On. The label will also re-release Enuff Z’Nuff’s self titled debut album and Strength. All these albums should be available right now.

Italian melodic rockers Hungryheart are back with their third album Dirty Italian Job which is out right now. You can check out their video for their track ‘Shoreline’ below.

YES have released a live video to promote their recently released live album on Frontiers Records. You can check out ‘South Side Of the Sky below.

Trixter have release another official video to promote their recently released album on Frontiers Records. You can check out the video for the title track ‘Human Era’ below.

TEN who have recently released their second album in less than year Isla De Muerta have release a lyric video to accompany the song ‘This Love’. The album is out right now on Rocktopia Records and you can check out the video here.

Rising UK rockers Night By Night have announced they are going on an extended hiatus. This is of course sad news for many who’d recently got into the band following the release of their debut album. I suspect much this could be down to parting ways with their vocalist and haven’t found a suitable replacement yet.

Midlands Metal Legends Judas Priest come back home for a show at Wolverhampton Civic Hall on November 26th. They’ll have Michael Schenker and his Temple of Rock in tow as support making sure we get a value for money show!

Popular Cult UK rockers Newman will release their new album The Elegance Machine in August on the AOR Heaven record label. Songs set for inclusion are ‘Don’t Stay Lonely’, ‘One Good Reason’, ‘She Walks In Silence’ and ‘Scars’.

Stala & So return with a new self titled album due for release in August on Escape Music. It’ll include the following tracks ‘I Need More’, ‘I Can See It In Your Eyes’, ‘Shine Out’ and ‘The Girl With The Guilty Eyes’. You can check out the first promo video to accompany the album for the track ‘When The Night Falls’ below.

Cult German melodic hard rockers Mad Max will release a best of album in August. Thunder, Storm and Passion will be released via the Steamhammer/SPV record label. The 12 tracks have all be re-recorded so look out for new versions of ‘Losing You’, ‘Hearts On Fire’, ‘Night Of Passion’ and ‘Wait For The Night’.

I don’t like Shinedown never have and it’s highly likely I never will, but these alternative rockers are extremely popular in melodic rock circles for some reason so I thought I best mention their new video for the track ‘Cut The Cord’ which can be enjoyed below. It’s taken from the bands fifth album which is due out later this year.

Operation: Mindcrime is the new band featuring ex-Queensryche vocalist Geoff Tate. The debut album is called The Key and will be released through Frontiers Records in September.

UK rockers Serpentine have released a new official lyric video for the track ‘The Hardest Fall’ which is one of my personal favourites from their new recently released album Circle Of Knives. Check it out below!

Some of you may remember Rockarma who released an album a few years back on Kivel Records. Well the lead vocalist of said band Damon Kelly has just released a solo album Love n’ Revenge. It was produced by Adriangale’s Vic Rivera and mastered by Harem Scarem’s Harry Hess. Tracks to be included are ‘Get This Sucker Started’, ‘Can’t Save Me’, ‘Breathe’ and ‘Don’t Walk Away’.

Popular British AOR vocalists Steve Overland (FM) and Chris Ousey (Heartland) have joined forces for a new dual project entitled Ozone. The album Self Defence will be released in September via the Escape Music record label. It includes performances and song writing talents of Mike Slamer and Tommy Denander. It will include the following tracks ‘So Blind’, ‘Save My Soul’, ‘Smile Before You Lie’ and ‘Practice What You Preach’.

Blackmore’s Night will release their tenth studio album All Our Yesterdays through Frontiers Records in September.

NWOBHM legends Tygers Of Pan Tang have released a new music video for the track ‘Never Satisfied’ lifted from their Crazy Nights Sessions EP. The Tygers hit the round later this year including a show at The Robin in Bilston on December 7th.

Constancia have unveiled their first promo video for the track ‘Hang Tough’ taken from their forthcoming album Final Curtain which is out on MelodicRock Records this month.

Former Europe guitarist Kee Marcello hits the road in the UK this October including a show on Sunday 4th at The River Rooms in Stourbridge. Local lads The Black Hounds will be supporting alongside female fronted rockers 7th Circle. There’s one for your gig diaries.

Stryper have officially launched an audio video for the oddly titled ‘Yahweh’. This is taken from the Christian rockers forthcoming album ‘Fallen’ set for release on Frontiers Records in October. Enjoy.

Lynch Mob have released another official audio to promote their forthcoming album Rebel which will be released by Frontiers Records in August. Check out ‘War’ below….

Also releasing their new album Devil’s Dozen in August is Royal Hunt. So here’s a taste for you the official audio video of ‘So Right So Wrong’.