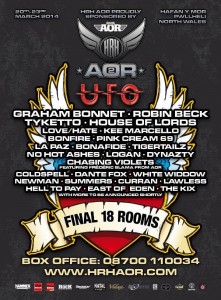 Legendary Midlands rockers Magnum have a new album out early next year and have just revealed a massive glut of live European dates including the UK and three Midlands shows including Leamington Spa Assembly, Notts Rock City and of course their home gig at Wolverhampton Wulfrun Hall on Saturday May 3rd!

I’m a little bit excited about this upcoming show at the Robin in Wolverhampton next March 24th, Robin Beck and House Of Lords! Yes you read that right Robin Beck is coming to rock the Robin with the always mighty House Of Lords in tow and support from Scottish melodic rockers Estrella. This of course follows the appearance of both bands at HRH AOR 2 a few days prior, so they should be well warmed up for us Black Country folk!

Legendary British classic rockers UFO have been added to HRH AOR next March. They will headline the Saturday night. To buy tickets go to www.hrhaor.com or ring 0203 287 6684. It takes place at Hafan Y Mor, North Wales between 20-23rd March.

Firefest have announced the 2014 line-up for the final ever show, it’ll take place at Nottingham Rock City on 24-26 October and tickets are available from http://www.firefestofficial.com/

Classic AOR rockers Toto have confirmed they are hard at work on a new album. It will see the light of day in Europe via Frontiers records in early 2015.

Rising Midlands rockers Fahran have just announced they will be supporting Snakecharmer at The Robin on January 24th 2014. Fahran have recently changed singers and now feature the vocal talents of Matt Black (Serpentine / Invisible Idols). Check out their brand new video for ‘Take This City Alive’ below.

Mitch Malloy has issued a new digital single and video – a cover of Bruno Mars’ ‘When I Was Your Man’. Check out the video below.

Rock Candy have another batch of oldies but goodies scheduled for re-release this month including Ace Frehley – ‘Trouble Walkin’, Gamma – ‘3’ and a trio of albums from Cult Canadian AOR heroes Honeymoon Suite – ‘S/T’, ‘The Big Prize’ and ‘Racing After Midnight’.

German Metal stalwarts Primal Fear are set to bring in the New Year with a bang on Frontiers Records. Their new album ‘Delivering The Black’ will be released in the UK on January 27th.  They will release a digital single and video for ‘When Death Comes Knocking’ on December 2nd. Other tracks that will be included on their latest opus are ‘King For A Day’, ‘Alive & On Fire’, ‘One Night In December’ and ‘Born With A Broken Heart’.

Def Leppard influenced rockers Loud Lion will release their album via Melodicrock Records in the early spring of 2014. From the snippets I’ve heard this is going to be a monster album!

Christian rockers Stryper have issued another video to accompany their new album No More Hell To Pay. Check out ‘Sympathy’ below.

Italian rockers Myland have released another video to accompany their new album Tales From The Inner Planet which is out now. Check out ‘She’s A Runa Way’ below.

4 Wheel Drive have video for their track ‘The Feeling’, check it out below and remember these guys are playing live at The Robin next January 12th co-headlining with Stonewire.

I AM I have released a video to accompany their new digital single, power ballad ‘See You Again’, check it out and enjoy!

Michael Monroe has released a new video for the track ‘Stained Glass Heart’ which is my favourite track from his latest album Horns and Halos. He also plays The Slade Rooms in Wolverhampton on the 3rd December!

Dutch Symphonic metallers Within Temptation will release their brand new album Hydra ahead of their UK tour on January 21st. Tracks to be included are ‘Let Us Burn’, ‘Dangerous’, ‘And We Run’ and ‘Tell Me Why’. It also features guest musician’s Tarja, Howard Jones and Xzibit.

UK rockers Curran have released a new lyric video for their song ‘Run Back To You’ which is lifted from their soon to be released album Beginnings. Curran are scheduled to perform live at HRH AOR next March.

Funky hair metal veterans Love/Hate, have announced they will be performing at The Slade Rooms in Wolverhampton on 19th March, just before they head off to play at the HRH AOR festival in North Wales.

Midlands rocker Daniel Trigger has released a new digital single ‘Unbreakable’. It’s definitely one for fans of modern rock akin to Alterbridge and it’s lifted from Dan’s forthcoming album Army of One due in early 2014.

Power metal super group Ring Of Fire will release their new album Battle of Leningrad via Frontiers Records in January. The band features vocalist Mark Boals, guitarist Tony McAlpine and classically trained keyboardist Vitalij Kuprij. Amongst the tracks included are ‘They’re Calling Your Name’, ‘Land Of Frozen Tears’, ‘Where Angels Play’ and ‘Our World’, check out some samples below.

Female fronted US rockers Hydrogyn have a new video for the track ‘Rock Me’ which is lifted from their forthcoming album Break The Chains.

Black Star Riders (the band formerly known as Thin Lizzy) have released a brand new video from their debut album; check out ‘Kingdom of the Lost’ below.

Cult Swiss AOR heroes China have a new album out called ‘We Are The Stars’ and you check out their new official video for ‘Everywhere You Are’ below.

Modern melodic rockers Vasey hail from Nottingham, still currently unsigned they have their debut album out now. They have also just issued a new official video for the track ‘Fade Out’ enjoy it below.

Brummie melodic rockers Daylight Robbery have released a new digital single ‘Samarah Never Sleeps’. They have also done a rather cool video to accompany the song which you can enjoy below. The band are currently still recording their second album, ‘Seconds Out’ which will be released next year and will be supported with live shows.

‘Thrive’ the new solo album from Angelica Rylin (The Murder Of My Sweet) is out now on Frontiers Records. She also has a brand new video out for the lead track ‘Breaking My Heart’.

The Scorpions will release their new live album ‘MTV Unplugged’ on December 2nd in double CD, DVD and Blu-ray formats via Sony Music. The album was recorded on two dates in their recent farewell tour in Athens, the first open air MTV unplugged.

Julian Angel’s Beautiful Beast has issued a new video for ‘Bad Boys Never Dance’ which is lifted from the forthcoming ‘Kick Down The Barricades’ album.

With the death of Riot vocalist Mark Reale last year, the band has decided to continue the band’s legacy with a new vocalist. After much searching and some auditions from well known names, they have now announced Todd Michael Hall as Reale’s successor.

I absolutely love Finnish melodic rockers Brother Firetribe so its great news to hear their highly anticipated and long overdue third album will see the light of day in early 2014!

If you’re a fan of the Allen / Lande trilogy of albums you’ll also know those celebrated albums were written by guitarist Magnus Karlsson. For the fourth album due in 2014 Karlsson has passed the song writing baton onto Timo Tolkki, so it’s very intriguing to see how the legacy of the project sounds going forward under a new song writer.

Not ones to ever stand still Swedish rockers H.E.A.T have their fourth album poised for release next February and a new video to accompany the first single due to hit us any day now.

If you know your Winger history you’ll know the band celebrates their 25th anniversary next year and will also release a brand new album through Frontiers Records next April. I have my fingers crossed they will get some tour dates organised for the UK to support it!

A new band from Scandinavia will interest many here, a super group no less, featuring members of Europe, Wig Wam, King Diamond and Motorhead – Nordic Beast. The band will release their debut next January.

In totally out the blue news Quiet Riot have announced their new lead singer, none other than Jizzy Pearl of Love / Hate!

And now for something a lot heavier the new single and video from Amaranthe, ‘Invinicble’ is lifted from the album ‘Nexus’. These guys are coming to blow a hole in the roof at The Slade Rooms in Wolverhampton on 9th April. I suspect neck braces will be handed out as fans leave the venue!

Ex- Nightwish singer Anette Olzon has her brand new solo album ‘Shine’ ready to unleash next February on earMusic. Now, to most rockers Anette was just the woman from an ABBA tribute band who replaced Tarja in Nightwish, but to us AOR fanboys, geeks, anoraks or basically people with good taste in music, she is the front woman of cult Swedish AORster’s Alyson Avenue! So as a major fan, stalker or whatever you want to call it I’m anxious and excitable for new music from her. Obviously I’d love for a pure AOR album but that would be wishful thinking. I had presumed she would chase her Nightwish fan base with a metallic album, but she has openly stated ‘Shine’ will be more pop-rock than we would perhaps expect, so it’ll definitely be more appetising to me!

Ferreira’s fifth album will be released via MelodicRock records on January 27th.

Melodicrock records will also release the new ‘Best Of’ from Spanish rockers Airless. This limited edition release will also be available from January 27th.