I enter the Electric Ballroom in north London tonight and walk straight into a metal-techno (who knew such a thing existed?) explosion of flashing lights and spacey undertones; the dark-synth demon that is GosT has arrived. It’s kind of like being in a hardcore club where everyone is out of their minds on God knows what. But also kind of like, boarding a spaceship and meeting an alien king. It’s unsettling, creepy and mind-boggling… and completely impossible to take your eyes off.

In a drastic change of scenery, the stage then darkens and the mood glums. Following a long, dark and mysterious build-up of repetitive riffage – one of black metal’s founding fathers – (and former Gorgoroth frontman) Gaahl, creeps onto the stage like a ghoul in the night. Whilst the guitarists bounce around him with fantastic brutality, Gaahl remains calm and still, pacing with deliberate intensity, raising his hands as though telling a story.

On occasions he leans over the edge of the stage whispering through war painted lips to an eager audience. His voice is a grumbling growl of distorted cruelty. Gaahls Wyrd was only established around five years ago but with a frontman as commanding as this, it is no wonder that they have already become legends in their own right, rather than clinging to the coat-tails of Gorgoroth.

Their debut full-length album ‘GastiR – Ghosts Invited’ was released to almost universal acclaim earlier this year. This evening the haunting title track opens proceedings – offering the perfect balance of black metal tempo and delicately sung lyrics working in tandem to create a spell-binding, witchy experience. There are a couple of Gorgoroth classics thrown in for good measure, although the new material such as the atmospheric ‘Carving the Voices’ shows off Gaahl’s luxuriously deep tones as finely as anything he ever delivered with Gorgoroth.

Every time you see Mayhem they serve up something entirely different. Having observed their set at Incineration Fest at this very venue back in May, laden with punkish attitude and violent hatred, I am surprised at how different they seem this evening. We are treated to an atmospheric saga of Satanism. With his trusty skull-mic, Attila haunts a rapidly misting stage in a hooded cloak, devilish horns poking out of his forehead. Things have become much more ‘Halloween’ since May.

Cast in a psychedelic light show spilling over from GosT’s disarming opening, he thrusts a crucifix of bones into the air with every scream, as though summoning a demonic force. Mayhem open with ‘Falsified and Hatred’ from new album Daemona – both atmospheric and brutalistic, we are sent into a frenzy. But the songs that cause the most chaos are the legendary tracks that act as pillars of the sub-genre; when that delicate opening riff of ‘Freezing Moon’ rings out people push hurriedly towards the pit and for finale ‘Pure Fucking Armageddon’, well, they just create a pit wherever they happen to be standing.

Fortunately tonight’s set is plagued by none of the glitches that marred Mayhem’s set at Damnation Fest in Leeds 48 hours earlier. The Camden crowd certainly had no cause for concern tonight and Necrobutcher is as fantastic as ever, pulling the entire set together with basslines so heavy and so mean that I fear some will be putting in whiplash claims when they get home. He bears his back-covering Mayhem tattoo boldly, as the band’s sole original member. Tonight Mayhem prove that they are a band that still possess the impact, influence and status that they did in the 90s; but with less court cases. 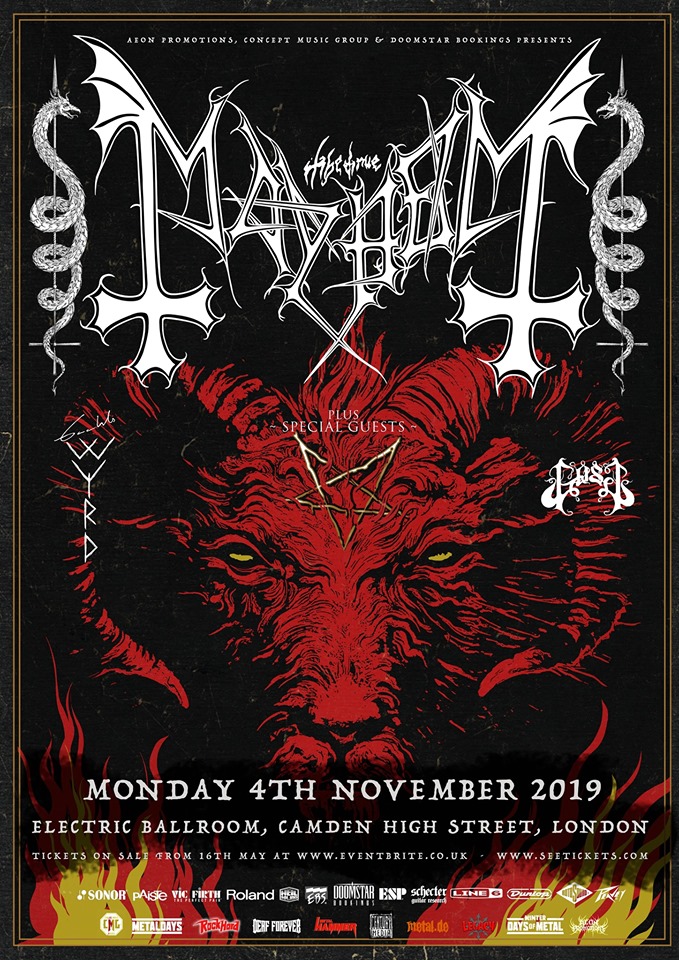