In Seventies Canada, Max Webster was on a parallel journey with UK bands like Genesis and Yes, but saw the splicing together of pop and rock as more of a new musical strand in the evolution of popular culture, rather than a revolution in attitudes. It was a simple, effective thought, but one that took them four albums to nail down.

A Million Vacations was released in 1979. It went platinum, and apart from thrusting MW into the vanguard of new Canadian rock, it simultaneously gave birth to 3 US charting singles for the band.

‘Let Go The Line’, written and sung by keyboard player, Terry Watkinson was the first. The song’s languid grace and distinctive melody is perfect for Watkinson’s fragile vocals, adding strings and piano sophistication to a bass and guitar heartbeat.

The cheery, upbeat ‘A Million Vacations’ was written by drummer Gary McCracken along with the band’s longtime lyric writer, Pye Dubois. Dubois had much the same role as John Lang had with Mr Mister, and Pete Sinfield with King Crimson and ELP, that of a key lyricist who was “almost but not quite a member of the band”.

The Kim Michell/Dubois co-write, ‘Paradise Skies’ is a more elaborate piece. Yet it remains compact, with a tight, if vaguely eccentric melodic structure. It’s busy but uncluttered and to begin with you never know quite which direction it’s gonna take. Not many people know this, but they performed the song on Top Of The Pops, back in 1979. Thanks to Youtube, we’ve rescued the moment.

Elsewhere, compositionally the album is exceptionally strong, and unafraid to take chances. Often there’s a whimsical, satirical flavour to the album’s songs … shades of Zappa and no less appealing.

Mitchell and Dubois continued to work closely together after the band’s breakup, with Mitchell enjoying a successful “solo” career, including several multi-platinum album sales during the eighties.

It’s worth noting that the label also publishes a 100 page, bi-monthly magazine, the content of which is not limited to its own releases. In fact they often play only a small part. Anyone with a fascination for Melodic Rock, AOR and Metal, either of the NWOBHM or US variety, will find much to enjoy among the profiles, interviews, news and reviews. 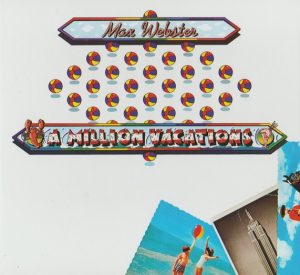