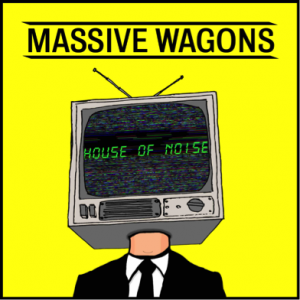 The highly anticipated fifth album from Lancaster’s anthemic rock five-piece is finally here! House Of Noise is out today, via Earache. The record is available on multiple formats: physical copies are on both CD and vinyl (with four different special editions!) and can be purchased here; in addition, the record can now be bought and streamed on all major digital platforms, such as: Spotify and Apple Music.

House Of Noise arrives in unprecedented times and can be easily seen as symbol of resilience and strength. The band chose to plan for a release during the height of the Covid-19 pandemic, finding new ways to remain creative despite the obvious restrictions.  The results of this can-do attitude included an incredible stop animation Lego themed video, the foundation of a highly successful Patreon group and series of DIY produced and created content that kept the rabid fan-base constantly engaged.Having reached the eve of release, the band are now excited to finally be releasing an album that they hope will take them to the upper reaches of the charts for the first time

Frontman Barry ‘Baz’ Mills comments: “‘I believe this is the album we’ve been trying to make for 10 years, I’m so excited to finally get this collection of songs out there, and the hard work that’s gone into this release campaign dwarfs anything we’ve done before, our crew has worked so hard from start to finish, it feels great to be in this band right now!”

Welcomed by the media and fans alike with anticipation and excitement, House Of Noise is the follow up to the chart-busting Full Nelson, a UK Top 20 hit in 2018. This is the band’s fifth studio album and easily their most accomplished work to date. House Of Noisebrings together all of the infectious elements that have endeared Massive Wagons to fans of maximum force rock n’ roll – a raucous rabble-rousing sense of community, straightforward from-the-heart lyrics, and an irresistible combination of pop melody and street-smart hooks. The album contains 12 tracks that vary from the high octane opener In It Together, to the anthemic title track and the frankly ludicrous, but hilarious, TheCurry Song,via the brooding menace of Heroand bittersweet lament of Sad, Sad Song.  The entire experience overflows with personality and passion, and sounds like nothing else. Massive Wagons have definitely found their groove.

To help celebrate the release, the band will perform a series of ‘virtual in-stores’ this week with participating indie record stores. They will also perform a live broadcast full set for Ramblin’ Man Fair, replacing the set they should have played at the festival itself this Friday 17th July, and have also deposited huge cardboard cut out displays around the country in various HMV stores for fans to find and have their photos taken with, in lieu of the band being unable to attend in person. To round out the week, the band will also play a full electric live set for Planet Rock as part of the ‘Rocks the Asylum’ live stream event on 25th July.

To coincide with album release week, Massive Wagons also announced they will be hitting the UK road once again in March 2021. A thirteen date explosive headline tour will bring them to all major cities across the country. The band’s reputation for entertaining, energetic and life-affirming shows has grown exponentially; Massive Wagons have played tirelessly throughout the years and established themselves as one of the most promising live acts on the scene. The band accumulated an enviable wealth of live experience being able to sell out multiple headline shows, to perform on important stages such as: Download Festival, Boomtown, Steelhouse Festival and also to share the spotlight with the likes of Status Quo, Lynyrd Skynyrd, The Wildhearts and Blackberry Smoke. 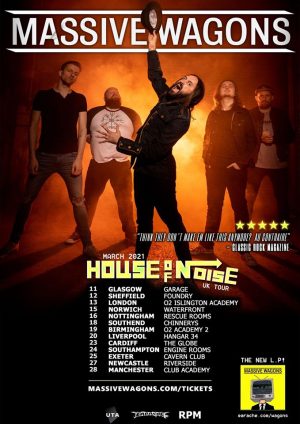 New album House Of Noise is out today, via Earache Records.
Album is available here: earache.com/wagons