Lanegan collaborator Duke Garwood should be writing themes for TV shows, the kind of TV shows that weave web after web of intrigue and mystery, the kind that go on for 5 or 6 or more seasons and keep their audience transfixed, never once falling foul of redundant or depthless scripts or characters. With a drummer by his side and a guitar and a mic to express himself, his sensitive, understated and nuanced music moves carefully through an array of moods, each as enchanting as the next. In his hands, the guitar becomes more than an instrument, it becomes a tool, a device for teasing out the elusive, the mysterious and the emotional. Combined with the dulcet tones of his mellow voice and the gently pulsing and decorative drums, his performance is spellbinding and the evening is transformed.

Mark Lanegan used to front Screaming Trees, y’know. Yes, he did. I know, given his solo material you wouldn’t think it would you? Collaborating with artists as diverse as Kurt Cobain, J Mascis, PJ Harvey, Queens of The Stone Age, Mad Season, Steve Fisk, Moby, Unkle, Duke Garwood, and a whole host of outstanding musicians that keeps on growing has given Lanegan many a platform to explore, develop and display his diverse tastes and his vocal ability. Touring on the back of his recently released and remarkable 10th solo album, Gargoyles, Lanegan opens his UK tour in the second city with a near-capacity crowd eager to bear witness to what is, frankly, a stunning performance.

Lanegan and his band stroll on to the stage and take their place. The band pick up their instruments and Lanegan, centre-stage, nods his appreciation to the much-deserved applause before they kick into ‘Death’s Head Tattoo’, the smoothly dark opener of his latest album. ‘Harvest Home’, ‘The Gravedigger’s Song’, ‘Riot In My House’ and ‘Wish You Well’ follow and the crowd, captivated, hang on every word, nod and rock along with the beats and go with the flow. And ‘Hit The City’ is beautiful, even without PJ Harvey.

Like his music, Lanegan doesn’t need to dress up his performance in clichés. It’s the music that matters and it’s the music that gets the full attention of both band and crowd. That he stands near stock-stillfor the whole show, one hand on the mic, the other half way down the mic stand, adds much to the music, his relaxed yet composed posture communicating much more than the most flamboyant frontman ever could. The band is tight and weaves their way through the songs, moving with and through the soundscapes, whispering with the lows, leaning into the subtlest and the most dynamic of grooves, and roaring with delicate precision.

With four songs from Gargoyle in quick(ish) succession – ‘Nocturne’, ‘Emperor’, ‘Goodbye To Beauty’ and the deserves-to-be-a-much-covered-classic ‘Beehive’ – and a mixture of tracks from Blues Funeral, Imitations, Field Songs, Bubblegum and Phantom Radio, Lanegan demonstrates just how deep and wide his musical groove has become since stepping out on his own almost 30 years ago. Closing out with ‘The Killing Season’ and a heart wrenching cover of Joy Division’s ‘Atmosphere’, the crowd are left in awe of one of the finest performances this or any other venue has seen. 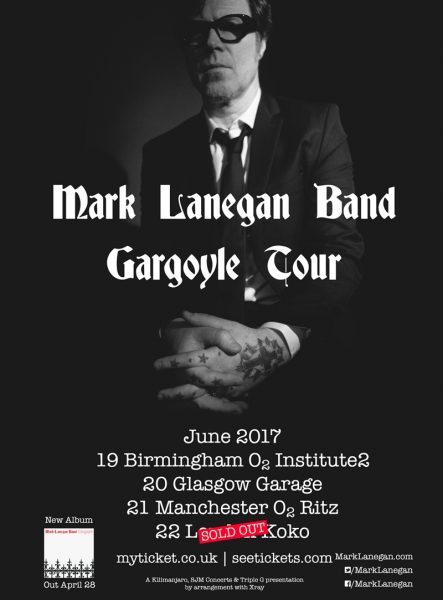