Continuing their impressive series of expanded, limited edition reissues, Ear Music’s focus band for 2018 is Marillion. They will reissue ten of the band’s live albums, previously available only on the band’s website, spread over the year in pairs. The series was kicked off in January with Live versions of Size Matters (2009) and Holidays In Eden (2011).

They are a band who self admittedly attract the anoraks of the Progrock universe. Fans who compare notes and obsess about the comparative merits of set lists. Tumbling . . . sets itself up for that kind of analysis . . . taking a “Memento” style, reverse timeline approach, starting with more recent material then working back to 1994. It a strikingly effective way to see how the band’s songwriting has developed over those years.

The mood is often dark, melancholy even, but the subtlety and strength of songs like ‘Legacy’ and ‘Cathedral Wall’ create a warmth all of their own, esp in the open air of the live setting.

Live, Steve Hogarth’s handling of song and lyrics is strong all the way through, his voice instinctively fastens on to that emotional sense of truth known only to the best actors and singers. His impassioned, articulate vocal narrative on ‘Real Tears For Sale’ is the flipside of a skittering, almost comedic vocal treatment of ‘The Damage’, surprising us again by suddenly cutting a razor sharp swathe through rising swells of keys, piano and guitar, effectively telling us that underneath all the seriousness are idealistic, romantic messages.

Something of a legendary gig now, Unplugged at The Walls started life as a cool idea for the band to play live at a local restaurant, in exchange for food and drink. Word spread fast and an international audience was treated to a 90 minute, “unplugged” set.

Conventional wisdom has it that the true test of a great song is how it sounds stripped down, minus the polish, the overdubs. So acoustic gigs are always something of a risk, and perhaps recognising that, the band rewrote and rearranged a substantial amount of their own original material for the gig. So while this is essentially an acoustic set, the twists and tweaks are immensely entertaining. The joyful atmospherics of ‘Space’s updated instrumental arrangement, and ‘Hooks In You’s jazz pop breeziness dovetail nicely with the gently epic, ‘Holloway Girl’, sucking in energy from the current of emotional electricity that runs through ‘Afraid Of Sunrise’.

That said, a couple of unexpected covers almost obscure the band’s own stuff. On ‘Abraham Martin And John’, the band coat the classic soul sweetness of the Marvin Gaye hit version with a layer of smoky blues, and on a wistful, resonating cover of the Beatles’ ‘Blackbird’, Hogarth surely confirms himself a blood brother of Crowded House’s Neil Finn.

For a band who manage to escape major public attention despite 9 UK Top Ten albums and numerous ‘single’ successes, these two album show us just why Marillion continue to be a guilty pleasure for the discerning thousands. 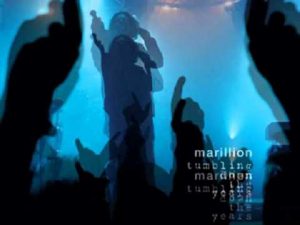 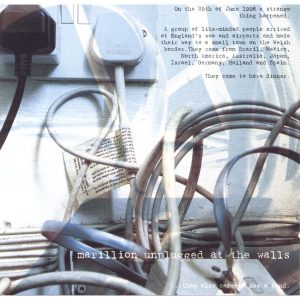