Released by Ear Music, Germany on 27 July 2018, and reviewed by Brian McGowan.

There can be few bands who’ve mined more gold out their recordings than Marillion. From as far back as 1996, their skilful use of the internet showed a shrewd commercial instinct. And since then, their success has been largely driven by close fan base involvement, carefully cultivated by the band via their website, podcasts, conventions, and regular fan club publications.

In 2016, they performed their F.E.A.R. Album live at the Royal Albert Hall. This is CD1 in this release. On CD2 they perform a bunch of songs with The In Praise Of Folly String Quartet.

The fact that they are described by Allmusic.com as an artrockneoprogrock band suggests that their music is…well, not easy to define. This huge gathering at the RAH (who bought all the tickets in 4 minutes) gasps, and applauds and whoops and cheers, and even at times sings along, and no doubt part of the reason for their love of the band is that very fact, the music is indefinable.

It’s unlikely there is a more measured and adroit album than F.E.A.R. The songs’ anglocentric lyrics, magnificently poetic and literate, and almost painfully personal, are unquestionably one reason why the band attract such a faithful following. The songs blossom even further, if that’s possible, in the live setting, and you’d swear the band leave something of themselves onstage after every performance, such is their commitment.

Once again, the relatively short (6 mins), densely contructed ‘Living In FEAR’ – and perhaps you could argue there’s an over-serving of sound here – hits just as hard as its lengthy big brothers, in large part due to Hogarth’s emphatic, soulful vocal performance. The other sprat, (at 7 mins), ‘White Paper’ grows into something of a lyrical leviathan in this live gig, perhaps because its subject matter – the crisis of identity and confidence that comes with growing older – is captured so accurately by Hogarth’s achingly sad vocal. A metaphor perhaps for the current state of UK politics.

The second CD includes some of the band’s magna opera, ‘Afraid Of Sunlight’, ‘Easter’ and ‘The Great Escape’. Each one can claim to have transcended the band’s chosen genre (even if it can’t be defined). Pocket symphonies that seem to expand and contract in response to audience feedback. We all know from bitter listening experience that a full orchestra can overwhelm even the most musical and musicianly of rock bands, it is a difficult equation to balance, so a string quartet was a wise choice. It is totally tuned into the jawdropping fluency of Rothery’s liquid guitar motifs, and perhaps even more especially to the Trewavas/ Mosley rhythmic axis. Altogether an unquestionably immersive experience. 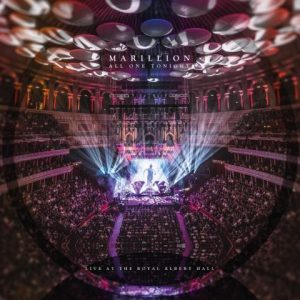