Paul Castles finds himself caught in the crossfire of this split release featuring newcomers Mares of Diomedes and Dreich, released via Heavy Earth Records on 12 September 2016

Split EPs don’t sit easy with everyone but for new acts they are a useful way to develop a fanbase and get your music heard by a wider audience. It’s best if there is some kind of musical symmetry between the acts and this rewarding dual effort by Mares of Diomedes and Dreich successfully achieves that.

Irish duo Mares of Diomedes released their self-titled debut EP via Heavy Music last year and one of their two tracks on this split, ‘Titan’, is taken from that. Their additional song is the bulldozer doom track ‘Earth Destroyer’, the title neatly capturing something of the heaviness around it. Beginning with a groundshaking thud denser than a murky Victorian smog, combined with a riff so hairy you feel it needs a good shave, a gentle injection of pace eventually beckons Jordan Campbell to unleash his screeched cries with drumming brother Shea providing the deeper supporting vocals.

‘Titan’ starts with a slightly more amenable riff although the sense of foreboding is not kept away for long as desolation levels rise against a backdrop of ambient guitar strums and isolated drumbeats. The vocals are distressed, and almost painful to listen to, but the overall coldness served up by Mares of Diomedes will warm the hearts of those doom and sludge worshippers who prefer a diet of unmitigating misery.

‘Blood Mortar’ is our first introduction to Dreich whose members have come from various compass points to make Sweden their home. They manage to maintain the barbaric and slightly feral atmosphere created by Mares of Diomedes. Again the tempo is controlled and deliberate although Dreich’s vocalist has a tremendous guttural delivery that sounds as though he’s having his tonsils removed while singing. ‘Where Do They Hide’ is built around drawn out drone lines of pummeling barbarism while the third Dreich number ‘Into the Abyss’ is a thunderous attack that switches from grumbled static sections to some more fevered outbursts.

Anyone who appreciates the destructive grooves of Conan, Samothrace and Slomatics will get their money’s worth with these five tracks which come in at around 35 minutes. The two bands may well be able to hook up for a few dates together at some point and if that comes off it’s a double header not to be missed. 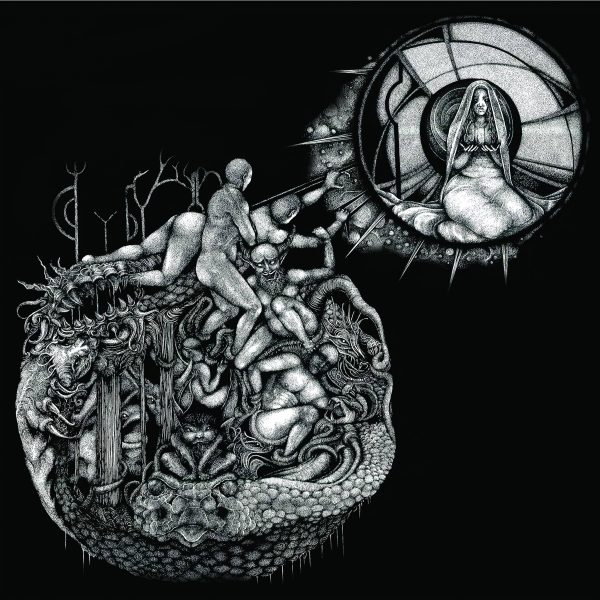