It’s corpsepaint central this evening at The Underworld in Camden. The north London borough is seemingly teeming with Satan’s spawn, gearing up for a night of blasphemy. Tonight is a special evening, with the magnificent Marduk performing their one and only UK leg of their Viktoria Europa Part II tour.

This is little short of a pilgrimage for many, drawing in followers from across the UK. One of the founding fathers of Black Metal, Marduk continue to be one of the most controversial acts on the scene and consequently one of the most highly-anticipated. Their extremity has become the stuff of legend, and this evening a blackened horde is clawing its way to Camden to snatch a glimpse of these Babylonian anti-gods. 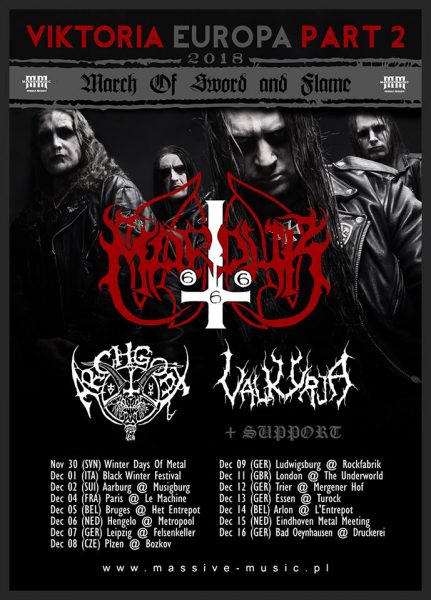 Preceding the Swedish headliners onto the compact subterranean stage are Archgoat. Formed in 1989 by two Finnish brothers, Ritual Butcherer and Lord Angelslayer, their occult enthused blackened attacks has enticed and spanned across several generations – despite their 10-year hiatus.

There was considerable excitement earlier this year when their new album The Luciferian Crown was released. Archgoat offer no conversation tonight, with the only spoken words being the indistinguishable introductory grunts of Lord Angelslayer before each song. He is encased head to toe in studs; leather arm bands, belt, the works. He stands tall and strong, Viking in stature. He is also a formidable bassist as well as vocalist; his fast riffs adding unstoppable pace to the more melodic guitar interludes.

The whole set throbs with dark atmosphere, often with pre-recorded sections layered over the top (mainly resembling animal torture). It’s hard and fast and quite often drummer Goat Aggressor seems to just be shaking his drumsticks rather than hitting in clear movements – it’s just so quick! But there are also more melodic and technical interludes, in which psychedelic riffs are replaced with clever runs down the fret, accompanied by a more stylistic approach on Goat Aggressor’s part – whose drumming becomes majestically executed.

The whole of The Luciferian Crown is studded with catchy power chord riffs with lots of slides and repetition. ‘Messiah of Pigs’ in particular is performed with frightening ferocity, the single guitar riff maintained throughout in an intoxicating display of blackened supremacy.

There is a lengthy build-up before the headliners appear. An eerie soundtrack of doom rings out for several minutes, as the crowd waits in anticipation. The stage is dressed from amp to amp in army camo, leafy netting draped over instruments – a clear nod to the bands strong World War II influences.

Marduk storm the stage after these solitary few minutes, the legendary vocalist Mortuus growling at the front row of corpse-painted-faces looking up at him. He offers significantly more conversation than Archgoat, but mainly in the form of a snarl: “London….”.

Knee-high military boots and leather arm patches with no studded gimmicks – Mortuus is a warrior of the utmost brutality. Opening with ‘Panzer Division Marduk’, in the very first headbang The Underworld’s low ceilings claim a strand of the vocalist’s hair which he duly rips back down. He does this several times! In fact I would have been surprised if he had left London with any hair at all. Perhaps this is the real reason he spends much of his time crouching down as the evening continues; either this or it’s an act of devotion to the fallen Lucifer.

The band released their new album Viktoria via Century Media back in June – another dark descent into battles and dictatorships. Early on this evening they perform ‘Werwolf’ from that album, which was also released as a single. It begins with the haunting swirl of air-raid sirens, with Mortuus descending into tales of enemy lines. The guitar riffs are catchy – two distinct sequences in alternation, switching between verse and chorus.

From each of their 14 studio albums Marduk serve up some memorable and much anticipated songs; ‘The Blond Beast’ from 2015 is welcomed with just as much excitement as ‘Wolves’, taken from the 1993 album Those of the Unlight. Set closer ‘Wolves’ is a particular personal highlight for me – with several riffs so entrancing they are hard to shake – even more so when heard live. They are still ringing in my ears even now.

This sell-out evening of black metal was bordering a ritualistic ceremony for the history of the genre. It was a gathering of those devoted to the most brutal of lyrical themes and the most ferocious of instrumental unions. For many, seeing Marduk in particular was simply unmissable – and it is impossible that anybody walked away disappointed. We saw living legends here this evening.